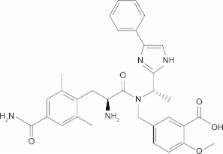 Diarrhea-predominant irritable bowel syndrome (IBS-D) belongs to the group of functional gastrointestinal disorders and is characterized by abdominal pain in conjunction with diarrhea. The incidence of IBS-D is currently increasing, leading to a heavy economic burden for patients and health care systems worldwide. Recent studies suggest eluxadoline as an attractive new tool for the treatment of patients with IBS-D. Eluxadoline is an orally active μ- and κ-opioid receptor agonist and δ-opioid receptor antagonist, with powerful antidiarrheal and analgesic activity. Eluxadoline is believed to act locally in the enteric nervous system, and has no adverse effects in the central nervous system. In this review, we discuss the most recent findings on the mechanism of action of eluxadoline and the results of the clinical trials in patients with IBS-D. We also discuss possible side effects and analyze the potential of eluxadoline to be used in the treatment of IBS-D.

An evidence-based position statement on the management of irritable bowel syndrome.

The role of mast cells in functional GI disorders.

Mira M Wouters,  María Vicario,  Javier Cambronero Santos (2016)
Functional gastrointestinal disorders (FGIDs) are characterized by chronic complaints arising from disorganized brain-gut interactions leading to dysmotility and hypersensitivity. The two most prevalent FGIDs, affecting up to 16-26% of worldwide population, are functional dyspepsia and irritable bowel syndrome. Their etiopathogenic mechanisms remain unclear, however, recent observations reveal low-grade mucosal inflammation and immune activation, in association with impaired epithelial barrier function and aberrant neuronal sensitivity. These findings come to challenge the traditional view of FGIDs as pure functional disorders, and relate the origin to a tangible organic substrate. The mucosal inflammatory infiltrate is dominated by mast cells, eosinophils and intraepithelial lymphocytes in the intestine of FGIDs. It is well established that mast cell activation can generate epithelial and neuro-muscular dysfunction and promote visceral hypersensitivity and altered motility patterns in FGIDs, postoperative ileus, food allergy and inflammatory bowel disease. This review will discuss the role of mucosal mast cells in the gastrointestinal tract with a specific focus on recent advances in disease mechanisms and clinical management in irritable bowel syndrome and functional dyspepsia.

D Sessler,  Andrea Kurz (2002)
Opioid treatment for postoperative or chronic pain is frequently associated with adverse effects, the most common being dose-limiting and debilitating bowel dysfunction. Postoperative ileus, although attributable to surgical procedures, is often exacerbated by opioid use during and following surgery. Postoperative ileus is marked by increased inhibitory neural input, heightened inflammatory responses, decreased propulsive movements and increased fluid absorption in the gastrointestinal tract. The use of opioids for chronic pain is characterised by a constellation of symptoms including hard dry stools, straining, incomplete evacuation, bloating, abdominal distension and increased gastroesophageal reflux. The current management of opioid-induced bowel dysfunction among patients receiving opioid analgesics consists primarily of nonspecific ameliorative measures. Intensive investigations into the mode of action of opioids have characterised three opioid receptor classes -mu, delta and kappa- that mediate the myriad of peripheral and central actions of opioids. Activation of mu-opioid receptors in the gastrointestinal tract is responsible for inhibition of gut motility, whereas receptors in the central nervous system mediate the analgesic actions of opioids. Blocking peripheral opioid receptors in the gut is therefore a logical therapeutic target for managing opioid-induced bowel dysfunction. Available opioid antagonists such as naloxone are of limited use because they are readily absorbed, cross the blood-brain barrier, and act at central opioid receptors to reverse analgesia and elicit opioid withdrawal. Methylnaltrexone and alvimopan are recently developed opioid antagonists with activity that is restricted to peripheral receptors. Both have recently shown the ability to reverse opioid-induced bowel dysfunction without reversing analgesia or precipitating central nervous system withdrawal signs in non-surgical patients receiving opioids for chronic pain. In addition, recent clinical studies with alvimopan suggest that it may normalise bowel function without blocking opioid analgesia in abdominal laparotomy patients with opioid-related postoperative ileus.