The systematics of Echinorhynchus Zoega in Müller, 1776 (Acanthocephala, Echinorhynchidae) elucidated by nuclear and mitochondrial sequence data from eight European taxa 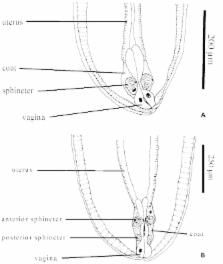 The acanthocephalan genus Echinorhynchus Zoega in Müller, 1776 ( sensu Yamaguti 1963) is a large and widespread group of parasites of teleost fish and malacostracan crustaceans, distributed from the Arctic to the Antarctic in habitats ranging from freshwaters to the deep-sea. A total of 52 species are currently recognised based on the conventional morphological species concept; however, the true diversity in the genus is masked by cryptic speciation. The considerable diversity within Echinorhynchus is an argument for subdividing the genus if monophyletic groups with supporting morphological characters can be identified. With this objective in mind, partial sequences of two genes with different rates of evolution and patterns of inheritance (nuclear 28S rRNA and mitochondrial cytochrome c oxidase subunit I) were used to infer the phylogenetic relationships among eight taxa of Echinorhynchus . These included representatives of each of three genus group taxa proposed in a controversial revision of the genus based on cement gland pattern, namely Echinorhynchus ( sensu stricto), Metechinorhynchus Petrochenko, 1956 and Pseudoechinorhynchus Petrochenko, 1956. These groupings have previously been rejected by some authorities, because the diagnostic character is poorly defined; this study shows that Echinorhynchus ( sensu stricto) and Metechinorhynchus are not natural, monophyletic groups. A revision of Echinorhynchus will require tandem molecular phylogenetic and morphological analyses of a larger sample of taxa, but this study has identified two morhological characters that might potentially be used to define new genera. The estimated phylogeny also provides insight into the zoogeographical history of Echinorhynchus spp. We postulate that the ancestral Echinorhynchus had a freshwater origin and the genus subsequently invaded the sea, probably several times. The freshwater taxa of the Echinorhynchus bothniensis Zdzitowiecki & Valtonen, 1987 clade may represent a reinvasion of freshwater by one or more ancestral marine species.

O Amin (2013)
In 1985, Amin presented a new system for the classification of the Acanthocephala in Crompton and Nickol's (1985) book 'Biology of the Acanthocephala' and recognized the concepts of Meyer (1931, 1932, 1933) and Van Cleave (1936, 1941, 1947, 1948, 1949, 1951, 1952). This system became the standard for the taxonomy of this group and remains so to date. Many changes have taken place and many new genera and species, as well as higher taxa, have been described since. An updated version of the 1985 scheme incorporating new concepts in molecular taxonomy, gene sequencing and phylogenetic studies is presented. The hierarchy has undergone a total face lift with Amin's (1987) addition of a new class, Polyacanthocephala (and a new order and family) to remove inconsistencies in the class Palaeacanthocephala. Amin and Ha (2008) added a third order (and a new family) to the Palaeacanthocephala, Heteramorphida, which combines features from the palaeacanthocephalan families Polymorphidae and Heteracanthocephalidae. Other families and subfamilies have been added but some have been eliminated, e.g. the three subfamilies of Arythmacanthidae: Arhythmacanthinae Yamaguti, 1935; Neoacanthocephaloidinae Golvan, 1960; and Paracanthocephaloidinae Golvan, 1969. Amin (1985) listed 22 families, 122 genera and 903 species (4, 4 and 14 families; 13, 28 and 81 genera; 167, 167 and 569 species in Archiacanthocephala, Eoacanthocephala and Palaeacanthocephala, respectively). The number of taxa listed in the present treatment is 26 families (18% increase), 157 genera (29%), and 1298 species (44%) (4, 4 and 16; 18, 29 and 106; 189, 255 and 845, in the same order), which also includes 1 family, 1 genus and 4 species in the class Polyacanthocephala Amin, 1987, and 3 genera and 5 species in the fossil family Zhijinitidae.