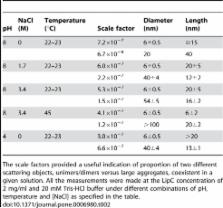 Halophiles are extremophiles that thrive in environments with very high concentrations of salt. Although the salt reliance and physiology of these extremophiles have been widely investigated, the molecular working mechanisms of their enzymes under salty conditions have been little explored.

A halophilic esterolytic enzyme LipC derived from archeaon Haloarcula marismortui was overexpressed from Escherichia coli BL21. The purified enzyme showed a range of hydrolytic activity towards the substrates of p-nitrophenyl esters with different alkyl chains (n = 2−16), with the highest activity being observed for p-nitrophenyl acetate, consistent with the basic character of an esterase. The optimal esterase activities were found to be at pH 9.5 and [NaCl] = 3.4 M or [KCl] = 3.0 M and at around 45°C. Interestingly, the hydrolysis activity showed a clear reversibility against changes in salt concentration. At the ambient temperature of 22°C, enzyme systems working under the optimal salt concentrations were very stable against time. Increase in temperature increased the activity but reduced its stability. Circular dichroism (CD), dynamic light scattering (DLS) and small angle neutron scattering (SANS) were deployed to determine the physical states of LipC in solution. As the salt concentration increased, DLS revealed substantial increase in aggregate sizes, but CD measurements revealed the maximal retention of the α-helical structure at the salt concentration matching the optimal activity. These observations were supported by SANS analysis that revealed the highest proportion of unimers and dimers around the optimal salt concentration, although the coexistent larger aggregates showed a trend of increasing size with salt concentration, consistent with the DLS data.

The solution α-helical structure and activity relation also matched the highest proportion of enzyme unimers and dimers. Given that all the solutions studied were structurally inhomogeneous, it is important for future work to understand how the LipC's solution aggregation affected its activity.

Veronika K Jaeger,  J L Arpigny (1999)
Knowledge of bacterial lipolytic enzymes is increasing at a rapid and exciting rate. To obtain an overview of this industrially very important class of enzymes and their characteristics, we have collected and classified the information available from protein and nucleotide databases. Here we propose an updated and extensive classification of bacterial esterases and lipases based mainly on a comparison of their amino acid sequences and some fundamental biological properties. These new insights result in the identification of eight different families with the largest being further divided into six subfamilies. Moreover, the classification enables us to predict (1) important structural features such as residues forming the catalytic site or the presence of disulphide bonds, (2) types of secretion mechanism and requirement for lipase-specific foldases, and (3) the potential relationship to other enzyme families. This work will therefore contribute to a faster identification and to an easier characterization of novel bacterial lipolytic enzymes.

Karl-Erich Jaeger,  Thorsten Eggert (2002)
Lipases constitute the most important group of biocatalysts for biotechnological applications. The high-level production of microbial lipases requires not only the efficient overexpression of the corresponding genes but also a detailed understanding of the molecular mechanisms governing their folding and secretion. The optimisation of industrially relevant lipase properties can be achieved by directed evolution. Furthermore, novel biotechnological applications have been successfully established using lipases for the synthesis of biopolymers and biodiesel, the production of enantiopure pharmaceuticals, agrochemicals, and flavour compounds.

M. Harel,  F Frolow,  I Silman … (1992)
We have identified a new protein fold--the alpha/beta hydrolase fold--that is common to several hydrolytic enzymes of widely differing phylogenetic origin and catalytic function. The core of each enzyme is similar: an alpha/beta sheet, not barrel, of eight beta-sheets connected by alpha-helices. These enzymes have diverged from a common ancestor so as to preserve the arrangement of the catalytic residues, not the binding site. They all have a catalytic triad, the elements of which are borne on loops which are the best-conserved structural features in the fold. Only the histidine in the nucleophile-histidine-acid catalytic triad is completely conserved, with the nucleophile and acid loops accommodating more than one type of amino acid. The unique topological and sequence arrangement of the triad residues produces a catalytic triad which is, in a sense, a mirror-image of the serine protease catalytic triad. There are now four groups of enzymes which contain catalytic triads and which are related by convergent evolution towards a stable, useful active site: the eukaryotic serine proteases, the cysteine proteases, subtilisins and the alpha/beta hydrolase fold enzymes.

Publisher ID: 09-PONE-RA-11351
DOI: 10.1371/journal.pone.0006980
PMC ID: 2736375
PubMed ID: 19759821
Copyright statement: Rao et al. This is an open-access article distributed under the terms of the Creative Commons Attribution License, which permits unrestricted use, distribution, and reproduction in any medium, provided the original author and source are credited.