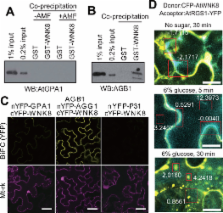 Signal transduction typically begins by ligand-dependent activation of a concomitant partner which is otherwise in its resting state. However, in cases where signal activation is constitutive by default, the mechanism of regulation is unknown. The Arabidopsis thaliana heterotrimeric Gα protein self-activates without accessory proteins, and is kept in its resting state by the negative regulator, AtRGS1 (Regulator of G protein Signaling 1), which is the prototype of a seven transmembrane receptor fused with an RGS domain. Endocytosis of AtRGS1 by ligand-dependent endocytosis physically uncouples the GTPase accelerating activity of AtRGS1 from the Gα protein, permitting sustained activation. Phosphorylation of AtRGS1 by AtWNK8 kinase causes AtRGS1 endocytosis, required both for G protein-mediated sugar signaling and cell proliferation. In animals, receptor endocytosis results in signal desensitization, whereas in plants, endocytosis results in signal activation. These findings reveal how different organisms rearrange a regulatory system to result in opposite outcomes using similar phosphorylation-dependent endocytosis.

A multicolored set of in vivo organelle markers for co-localization studies in Arabidopsis and other plants.

Xue Cai,  Andreas Nebenführ,  Christopher P. Nelson (2007)
Genome sequencing has resulted in the identification of a large number of uncharacterized genes with unknown functions. It is widely recognized that determination of the intracellular localization of the encoded proteins may aid in identifying their functions. To facilitate these localization experiments, we have generated a series of fluorescent organelle markers based on well-established targeting sequences that can be used for co-localization studies. In particular, this organelle marker set contains indicators for the endoplasmic reticulum, the Golgi apparatus, the tonoplast, peroxisomes, mitochondria, plastids and the plasma membrane. All markers were generated with four different fluorescent proteins (FP) (green, cyan, yellow or red FPs) in two different binary plasmids for kanamycin or glufosinate selection, respectively, to allow for flexible combinations. The labeled organelles displayed characteristic morphologies consistent with previous descriptions that could be used for their positive identification. Determination of the intracellular distribution of three previously uncharacterized proteins demonstrated the usefulness of the markers in testing predicted subcellular localizations. This organelle marker set should be a valuable resource for the plant community for such co-localization studies. In addition, the Arabidopsis organelle marker lines can also be employed in plant cell biology teaching labs to demonstrate the distribution and dynamics of these organelles.

The 2.0 A crystal structure of a heterotrimeric G protein.

J Sondek,  Paul Sigler,  David Lambright … (1996)
The structure of a heterotrimeric G protein reveals the mechanism of the nucleotide-dependent engagement of the alpha and beta gamma subunits that regulates their interaction with receptor and effector molecules. The interaction involves two distinct interfaces and dramatically alters the conformation of the alpha but not of the beta gamma subunits. The location of the known sites for post-translational modification and receptor coupling suggest a plausible orientation with respect to the membrane surface and an activated heptahelical receptor.

Jun Kawai,  Masami Muramatsu,  Akira Shinagawa … (2002)
Full-length complementary DNAs (cDNAs) are essential for the correct annotation of genomic sequences and for the functional analysis of genes and their products. We isolated 155,144 RIKEN Arabidopsis full-length (RAFL) cDNA clones. The 3'-end expressed sequence tags (ESTs) of 155,144 RAFL cDNAs were clustered into 14,668 nonredundant cDNA groups, about 60% of predicted genes. We also obtained 5' ESTs from 14,034 nonredundant cDNA groups and constructed a promoter database. The sequence database of the RAFL cDNAs is useful for promoter analysis and correct annotation of predicted transcription units and gene products. Furthermore, the full-length cDNAs are useful resources for analyses of the expression profiles, functions, and structures of plant proteins.

These two authors equally contributed to this work

The author responsible for distribution of materials integral to the findings presented in this article is Dr. Alan Jones alan_jones@ 123456unc.edu