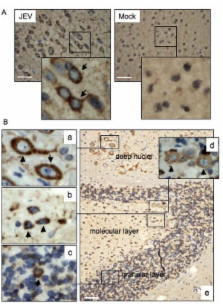 Japanese encephalitis virus (JEV), as a re-emerging virus that causes 10,000-15,000 human deaths from encephalitis in the world each year, has had a significant impact on public health. Pigs are the natural reservoirs of JEV and play an important role in the amplification, dispersal and epidemiology of JEV. The nonstructural protein 3 (NS3) of JEV possesses enzymatic activities of serine protease, helicase and nucleoside 5'-triphosphatase, and plays important roles in viral replication and pathogenesis.

We characterized the NS3 protein of a neurovirulent strain of JEV (SH-JEV01) isolated from a field-infected pig. The NS3 gene of the JEV SH-JEV01 strain is 1857 bp in length and encodes protein of approximately 72 kDa with 99% amino acid sequence identity to that of the representative immunotype strain JaGAr 01. The NS3 protein was detectable 12 h post-infection in a mouse neuroblastoma cell line, Neuro-2a, and was distributed in the cytoplasm of cells infected with the SH-JEV01 strain of JEV. In the brain of mice infected with the SH-JEV01 strain of JEV, NS3 was detected in the cytoplasm of neuronal cells, including pyramidal neurons of the cerebrum, granule cells, small cells and Purkinje cells of the cerebellum.

The NS3 protein of a neurovirulent strain of JEV isolated from a pig was characterized. It is an approximately 72 kDa protein and distributed in the cytoplasm of infected cells. The Purkinje cell of the cerebellum is one of the target cells of JEV infection. Our data should provide some basic information for the study of the role of NS3 in the pathogenesis of JEV and the immune response.

Past, Present, and Future of Japanese Encephalitis

Focco van den Akker,  Isla S Mackenzie,  Scott Ritchie (2008)
Japanese encephalitis virus (JEV) (Flavivirus: Flaviviridae) is a leading cause of encephalitis in eastern and southern Asia. The virus is maintained in a zoonotic cycle between ardeid wading birds and/or pigs and Culex mosquitoes. The primary mosquito vector of JEV is Culex tritaeniorhynchus, although species such as Cx. gelidus, Cx. fuscocephala, and Cx. annulirostris are important secondary or regional vectors. Control of JEV is achieved through human and/or swine vaccination, changes in animal husbandry, mosquito control, or a combination of these strategies. This review outlines the ecology of JEV and examines the recent expansion of its geographical range, before assessing its ability to emerge in new regions, using the hypothetical establishment in the United States as a case study.

Control of Japanese encephalitis--within our grasp?