Reduction in exacerbation of COPD in patients of advanced age using the Japanese Kampo medicine Dai-kenchu-to: a retrospective cohort study 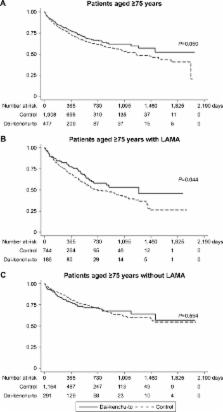 Patients with symptomatic COPD are recommended to use inhaled bronchodilators containing long-acting muscarinic receptor antagonists (LAMAs). However, bronchodilators may cause gastrointestinal adverse effects due to anticholinergic reactions, especially in advanced-age patients with COPD. Dai-kenchu-to (TU-100, Da Jian Zhong Tang in Chinese) is the most frequently prescribed Japanese herbal Kampo medicine and is often prescribed to control abdominal bloating and constipation. The purpose of this study was to evaluate the role of Dai-kenchu-to as a supportive therapy in advanced-age patients with COPD.

We used the Japanese Diagnosis Procedure Combination inpatient database and identified patients aged ≥75 years who were hospitalized for COPD exacerbation. We then compared the risk of re-hospitalization for COPD exacerbation or death between patients with and without Dai-kenchu-to using 1-to-4 propensity score matching. A Cox proportional hazards model was used to compare the two groups. We performed subgroup analyses for patients with and without LAMA therapy.

Toru Kono,  Yuji Omiya,  Yoshiki Hira … (2011)
Daikenchuto (TU-100), a traditional Japanese medicine, has been reported to up-regulate the adrenomedullin (ADM)/calcitonin gene-related peptide (CGRP) system, which is involved in intestinal vasodilatation. The microvascular dysfunction of the intestine in Crohn's disease (CD), due to down-regulation of the ADM/CGRP system, is etiologically related to the recurrence of CD. Therefore, we investigated the vasodilatory effect of TU-100 in a CD rat model. Colitis was induced by the rectal instillation of 2,4,6-trinitrobenzenesulfonic acid (TNBS) in rats. Laser Doppler blood flowmetry was used to measure colonic blood flow. ADM, CGRP, and their receptors in the ischemic colon were measured by reverse transcription polymerase chain reaction (RT-PCR) and enzyme immunoassays. Additionally, we determined whether the intestinal epithelial cell line IEC-6 released ADM in response to TU-100. TU-100 increased blood flow in ischemic segments of the colon but not in hyperemic segments. Pretreatment with an antibody to ADM abolished the vasodilatory effect of TU-100. CGRP levels and βCGRP mRNA expression were decreased in the ischemic colon, while protein and mRNA levels of ADM were unchanged. Hydroxy α-sanshool, the main constituent of TU-100, was the most active component in improving blood flow. Additionally, both TU-100 and hydroxy α-sanshool enhanced the release of ADM from IEC-6 cells. In the ischemic colon, endogenous βCGRP, but not ADM, was decreased. Thus, it was concluded that TU-100 ameliorated microvascular dysfunction by the up-regulation of endogenous ADM in the CD rat model. TU-100 may be a possible therapeutic agent for gastrointestinal ischemia-related diseases including CD.

Disturbed intestinal integrity in patients with COPD: effects of activities of daily living.

Erica Rutten,  Kaatje Lenaerts,  Wim A Buurman … (2014)
COPD is accepted to be a multicomponent disease with various comorbidities. To our knowledge, the contribution of the GI tract to the systemic manifestation of COPD has never been investigated. This metabolically active organ may experience recurring local oxygen deficits during daily life, leading to disturbed intestinal integrity in patients with COPD.

Toru Kono,  Mitsuo Shimada,  Masahiro Yamamoto … (2015)
Herbal medicines have been used in Japan for more than 1500 years and traditional Japanese medicines (Kampo medicines) are now fully integrated into the modern healthcare system. In total, 148 Kampo formulae are officially approved as prescription drugs and covered by the national health insurance system in Japan. However, despite their long track record of clinical use, the multi-targeted, multi-component properties of Kampo medicines, which are fundamentally different from Western medicines, have made it difficult to create a suitable framework for conducting well-designed, large-scale clinical trials. In turn, this has led to misconceptions among western trained physicians concerning the paucity of scientific evidence for the beneficial effects of Kampo medicines. Fortunately, there has been a recent surge in scientifically robust data from basic and clinical studies for some of the Kampo medicines, e.g., daikenchuto (TU-100). Numerous basic and clinical studies on TU-100, including placebo-controlled double-blind studies for various gastrointestinal disorders, and absorption, distribution, metabolism and excretion (ADME) studies, have been conducted or are in the process of being conducted in both Japan and the USA. Clinical studies suggest that TU-100 is beneficial for postoperative complications, especially ileus and abdominal bloating. ADME and basic studies indicate that the effect of TU-100 is a composite of numerous actions mediated by multiple compounds supplied via multiple routes. In addition to known mechanisms of action via enteric/sensory nerve stimulation, novel mechanisms via the TRPA1 channel and two pore domain potassium channels have recently been elucidated. TU-100 compounds target these channels with and without absorption, both before and after metabolic activation by enteric flora, with different timings and possibly with synergism.