Characterization and Purification of Bergamottin from Citrus grandis (L.) Osbeck cv. Yongjiazaoxiangyou and Its Antiproliferative Activity and Effect on Glucose Consumption in HepG2 cells 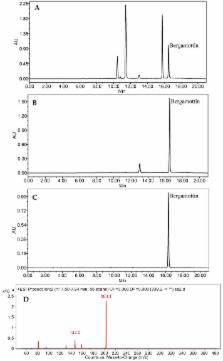 Inactivation of cytochrome P450 3A4 by bergamottin, a component of grapefruit juice.

Keith R. Hayes,  Matthew K Iyer,  James P. Hollenberg … (1998)
Grapefruit juice has been found to significantly increase oral bioavailability of several drugs metabolized by cytochrome P450 3A4 (P450 3A4) through inhibiting the enzymatic activity and decreasing the content of intestinal P450 3A4. HPLC/MS/MS and HPLC/UV analyses of ethyl acetate extracts from grapefruit juice revealed the presence of several furanocoumarins of which bergamottin (BG) is the major one. BG was shown to inactivate P450 3A4 in a reconstituted system consisting of purified P450 3A4, NADPH-cytochrome P450 reductase, cytochrome b5, and phospholipids. Inactivation was time- and concentration-dependent and required metabolism of BG. The loss of catalytic activity exhibited pseudo-first-order kinetics. The values of kinactivation and KI calculated from the inactivation studies were 0.3 min-1 and 7.7 microM, respectively. While approximately 70% of the erythromycin N-demethylation activity was lost during incubation with BG in the reconstituted system, P450 3A4 retained more than 90% of the heme as determined either by UV-visible spectroscopy or by HPLC. However, approximately 50% of the apoP450 in the BG-inactivated P450 3A4 incubation mixture could not be recovered from a reverse-phase HPLC column when compared with the -NADPH control. The mechanism of the inactivation appears to involve modification of the apoP450 in the active site of the enzyme instead of heme adduct formation or heme fragmentation. These results indicate that BG, the primary furanocoumarin extracted from grapefruit juice, is a mechanism-based inactivator of P450 3A4. BG was also found to inhibit the activities of P450s 1A2, 2A6, 2C9, 2C19, 2D6, 2E1, and 3A4 in human liver microsomes.

Hai-Yan Zhang,  Hong Sun (2010)
The transcription factor Forkhead Box P3 (Foxp3) has been shown to play important roles in the occurring of regulatory T cells (Tregs). Limited evidence indicated that it was also expressed in tissues other than thymus and spleen, while, very recently, it was identified as a suppressor gene in breast cancer. However, the precise role and molecular mechanism of the action of Foxp3 in ovarian cancer remained unclear. To elucidate the function of Foxp3, we examined the expression of Foxp3 in ovarian cancerous cells and the consequences of up-regulation of Foxp3 in epithelial ovarian cancer cell lines, respectively. By multiple cellular and molecular approaches such as gene transfection, CCK-8 assay, flow cytometry, RT-PCR, in-cell western, wound healing assay, and invasion assay, we found that Foxp3 was weakly/no expressed in ovarian cancerous cells. Up-regulation of Foxp3 inhibited cell proliferation, decreased cell migration, and reduced cell invasion. Compared with control, Foxp3 up-regulated cells showed decreased expression of Ki-67 and cyclin-dependent kinases (CDKs). Moreover, up-regulation of Foxp3 reduced the expression of matrix metalloproteinase-2 (MMP-2) and urokinase-type plasminogen activator (uPA), resulting in the inhibition of cell migration and invasion. In addition, Foxp3 up-regulation inhibited the activation of mammalian target of rapamycin (mTOR) and NF-kappaB signaling. These findings suggested that up-regulation of Foxp3 could be a novel approach for inhibiting ovarian cancer progression. Copyright 2009 Elsevier Ireland Ltd. All rights reserved.

Bo Yang,  Yi Su,  Ji Cao … (2010)
Novel therapeutic strategies are needed to address and to solve the emerging problem of hypoxia-induced resistance to anticancer drugs. N-(4-Hydroxyphenyl)retinamide (4-HPR) exhibits potent anticancer and chemopreventive activities, but its inefficiency under hypoxia, through undetermined mechanisms, may contribute to its lack of activity in clinical trials. In this study, we showed that under normoxia, 4-HPR resulted in apoptosis and ultimate cell death; in contrast, under hypoxia, autophagy was preferentially induced by 4-HPR at an equivalent concentration, accompanied by microtubule associated protein light-chain 3 (LC3) conversion and acidic vesicular organelle formation. Under hypoxia, autophagy inhibition by 3-methyladenine or chloroquine significantly enhanced apoptosis and decreased cell viability in 4-HPR-exposed cells, indicating that autophagy prevents cancer cell death and presumably leads to hypoxia-induced resistance to 4-HPR. Importantly, knockdown of hypoxia-inducible factor-1α (HIF-1α) inhibited autophagy but promoted 4-HPR-induced apoptosis under hypoxia, demonstrating its critical role as a mediator of this protective autophagy. The present study provides the first evidence supporting the hypothesis that autophagy and apoptosis can be differentially induced by 4-HPR under different oxygen conditions; mediated by HIF-1α, 4-HPR-induced autophagy under hypoxia confers a survival advantage to HeLa cells, protects them from 4-HPR-induced death signals, and thus contributes to their hypoxia-induced resistance to this agent. Our data suggest that autophagy inhibition is a potential alternative strategy to overcome hypoxia-induced resistance to 4-HPR and enhance the anticancer activities of this agent. Copyright © 2010 Elsevier Ltd. All rights reserved.