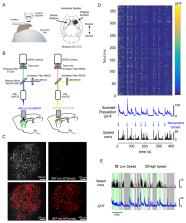 Striatal pavalbumin (PV) and cholinergic (CHI) interneurons are poised to play major roles in behavior by coordinating the networks of medium spiny cells that relay motor output. However, the small numbers and scattered distribution of these cells has made it difficult to directly assess their contribution to activity in networks of MSNs during behavior. Here, we build upon recent improvements in single cell calcium imaging combined with optogenetics to test the capacity of PVs and CHIs to affect MSN activity and behavior in mice engaged in voluntarily locomotion. We find that PVs and CHIs have unique effects on MSN activity and dissociable roles in supporting movement. PV cells facilitate movement by refining the activation of MSN networks responsible for movement execution. CHIs, in contrast, synchronize activity within MSN networks to signal the end of a movement bout. These results provide new insights into the striatal network activity that supports movement.

Putting a spin on the dorsal-ventral divide of the striatum.

P. Voorn,  Louk J. M. J. Vanderschuren,  Henk J. Groenewegen … (2004)
Since its conception three decades ago, the idea that the striatum consists of a dorsal sensorimotor part and a ventral portion processing limbic information has sparked a quest for functional correlates and anatomical characteristics of the striatal divisions. But this classic dorsal-ventral distinction might not offer the best view of striatal function. Anatomy and neurophysiology show that the two striatal areas have the same basic structure and that sharp boundaries are absent. Behaviorally, a distinction between dorsolateral and ventromedial seems most valid, in accordance with a mediolateral functional zonation imposed on the striatum by its excitatory cortical, thalamic and amygdaloid inputs. Therefore, this review presents a synthesis between the dorsal-ventral distinction and the more mediolateral-oriented functional striatal gradient.

W.M.H. and H.J.G. performed all experiments. M.R. and D.Z. analyzed the data. M.B. contributed software for video processing and data analysis. X.H. supervised the study. W.M.H, H.J.G, M.R., A.G.D, and X.H. wrote the manuscript, and contributed to the interpretation of the results. A.G.D. and MK provided consultation on statistical analysis and on permutation tests. V.S. provided consultation on calcium imaging data analysis and on generalized linear models.