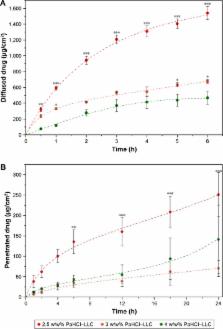 Papaverine hydrochloride (PaHCl) is an old, well-known drug with spasmolytic activity but it has therapeutic effect in erectile dysfunction, too. As an intracavernous injection, it is not used in urologic clinics today because the side effects of the injection are pain, scarring or priapism. Our aim was to develop and test a topical semi-solid preparation containing PaHCl that would provide an alternative administration option by eliminating the undesirable side effects of the injection.

Lyotropic liquid crystal (LLC) systems were formulated as a semi-solid preparation with different concentrations of PaHCl. The characterization of the LLC structure was performed by polarization microscopy using a Leica image analyzer and rheological measurements. The drug diffusion and penetration tests were performed with in vitro synthetic membrane and an ex vivo human epidermis, using Franz diffusion cell to test the skin penetration of PaHCl. Human skin was investigated by Raman microscope to visualize the Active Pharmaceutical Ingredient (API) in different skin layers.

Based on our results, a PaHCl containing topically used LLC formulation may be a suitable and effective alternative to the injectable formulation.

Konstantinos Hatzimouratidis,  Andrea Salonia,  P Adaikan … (2016)
Treatment of erectile dysfunction is based on pharmacotherapy for most patients.

Pietro Calandra,  Salvatore Magazù,  Mikhail Kiselev … (2015)
Amphiphiles are synthetic or natural molecules with the ability to self-assemble into a wide variety of structures including micelles, vesicles, nanotubes, nanofibers, and lamellae. Self-assembly processes of amphiphiles have been widely used to mimic biological systems, such as assembly of lipids and proteins, while their integrated actions allow the performance of highly specific cellular functions which has paved a way for bottom-up bionanotechnology. While amphiphiles self-assembly has attracted considerable attention for decades due to their extensive applications in material science, drug and gene delivery, recent developments in nanoscience stimulated the combination of the simple approaches of amphiphile assembly with the advanced concept of supramolecular self-assembly for the development of more complex, hierarchical nanostructures. Introduction of stimulus responsive supramolecular amphiphile assembly-disassembly processes provides particularly novel approaches for impacting bionanotechnology applications. Leading examples of these novel self-assembly processes can be found, in fact, in biosystems where assemblies of different amphiphilic macrocomponents and their integrated actions allow the performance of highly specific biological functions. In this perspective, we summarize in this tutorial review the basic concept and recent research on self-assembly of traditional amphiphilic molecules (such as surfactants, amphiphile-like polymers, or lipids) and more recent concepts of supramolecular amphiphiles assembly which have become increasingly important in emerging nanotechnology.