Clinical efficacy of nab-paclitaxel in patients with metastatic pancreatic cancer 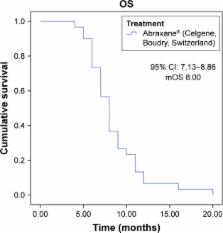 Pancreatic carcinoma is the neoplasia with the major mortality, and main standard treatments in this cancer increase survival but do not lead to complete recovery of the patient. The aim of this study was to evaluate the efficacy of Abraxane ® (nab-paclitaxel) in Italian patients with metastatic pancreatic cancer (MPC).

We conducted a retrospective analysis of 80 patients. Overall survival (OS) was the primary end point for evaluating the efficacy of nab-paclitaxel in combination with gemcitabine treatment, while carbohydrate antigen 19-9 (CA 19-9) reduction, safety, progression-free survival (PFS), overall response rate and reduction in pain were secondary end points.

The median OS was 8 months, and the median PFS was 5 months. A considerable difference in CA 19-9 before and after treatment was observed. Descriptive and correlation analyses were done to examine the relationship between CA 19-9 response and OS. Linear regression analysis between OS and CA 19-9 response revealed that CA 19-9 is an important predictor of OS, showing a positive correlation.

Nab-paclitaxel is a well-tolerated and effective treatment for patients affected by MPC. The drug showed an improved tolerability profile, significant pain relief and an increase in survival rate.

Gemcitabine in combination with oxaliplatin compared with gemcitabine alone in locally advanced or metastatic pancreatic cancer: results of a GERCOR and GISCAD phase III trial.

P. Hammel,  C Lepère,   … (2005)
Gemcitabine (Gem) is the standard treatment for advanced pancreatic cancer. Given the promising phase II results obtained with the Gem-oxaliplatin (GemOx) combination, we conducted a phase III study comparing GemOx with Gem alone in advanced pancreatic cancer. Patients with advanced pancreatic cancer were stratified according to center, performance status, and type of disease (locally advanced v metastatic) and randomly assigned to either GemOx (gemcitabine 1 g/m2 as a 100-minute infusion on day 1 and oxaliplatin 100 mg/m2 as a 2-hour infusion on day 2 every 2 weeks) or Gem (gemcitabine 1 g/m2 as a weekly 30-minute infusion). Three hundred twenty-six patients were enrolled; 313 were eligible, and 157 and 156 were allocated to the GemOx and Gem arms, respectively. GemOx was superior to Gem in terms of response rate (26.8% v 17.3%, respectively; P = .04), progression-free survival (5.8 v 3.7 months, respectively; P = .04), and clinical benefit (38.2% v 26.9%, respectively; P = .03). Median overall survival (OS) for GemOx and Gem was 9.0 and 7.1 months, respectively (P = .13). GemOx was well tolerated overall, although a higher incidence of National Cancer Institute Common Toxicity Criteria grade 3 and 4 toxicity per patient was observed for platelets (14.0% for GemOx v 3.2% for Gem), vomiting (8.9% for GemOx v 3.2% for Gem), and neurosensory symptoms (19.1% for GemOx v 0% for Gem). These results confirm the efficacy and safety of GemOx, but this study failed to demonstrate a statistically significant advantage in terms of OS compared with Gem. Because GemOx is the first combined treatment to be superior to Gem alone in terms of clinical benefit, this promising regimen deserves further development.

Phase III randomized comparison of gemcitabine versus gemcitabine plus capecitabine in patients with advanced pancreatic cancer.

David Harper,  Adrian Crellin,  M Eatock … (2009)
Both gemcitabine (GEM) and fluoropyrimidines are valuable treatment for advanced pancreatic cancer. This open-label study was designed to compare the overall survival (OS) of patients randomly assigned to GEM alone or GEM plus capecitabine (GEM-CAP). Patients with previously untreated histologically or cytologically proven locally advanced or metastatic carcinoma of the pancreas with a performance status

Davendra P.S. Sohal,  Pamela B Mangu,  Alok A. Khorana … (2016)
To provide evidence-based recommendations to oncologists and others for the treatment of patients with metastatic pancreatic cancer.