Evidence That Mutation Is Universally Biased towards AT in Bacteria 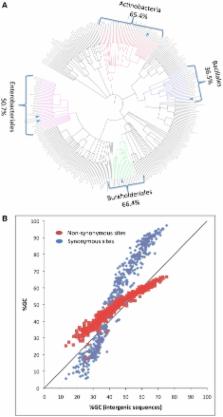 Mutation is the engine that drives evolution and adaptation forward in that it generates the variation on which natural selection acts. Mutation is a random process that nevertheless occurs according to certain biases. Elucidating mutational biases and the way they vary across species and within genomes is crucial to understanding evolution and adaptation. Here we demonstrate that clonal pathogens that evolve under severely relaxed selection are uniquely suitable for studying mutational biases in bacteria. We estimate mutational patterns using sequence datasets from five such clonal pathogens belonging to four diverse bacterial clades that span most of the range of genomic nucleotide content. We demonstrate that across different types of sites and in all four clades mutation is consistently biased towards AT. This is true even in clades that have high genomic GC content. In all studied cases the mutational bias towards AT is primarily due to the high rate of C/G to T/A transitions. These results suggest that bacterial mutational biases are far less variable than previously thought. They further demonstrate that variation in nucleotide content cannot stem entirely from variation in mutational biases and that natural selection and/or a natural selection-like process such as biased gene conversion strongly affect nucleotide content.

Natural selection sorts through the variability generated by mutation and biases evolution toward fitter outcomes. However, because mutation is itself not entirely random it can also bias the direction of evolution independently of selection. For instance, it is often assumed that the extreme variation observed in nucleotide content among bacteria (from ∼20% to ∼80% GC) is predominantly driven by extreme differences in mutational biases towards or away from GC. Here, we show that bacterial lineages that recently developed clonal, pathogenic lifestyles evolve under weak selection and that polymorphisms in these bacteria can be used as a fair proxy for mutational spectra. We analyze large sequence datasets from five clonal pathogens in four diverse bacterial clades spanning most of the range of genomic nucleotide content. We find that, surprisingly, mutation is AT-biased in every case to a very similar degree and in each case it is dominated by transitions from C/G to T/A. This demonstrates that mutational biases are far les variable than previously assumed and that variation in bacterial nucleotide content is not due entirely to mutational biases. Rather natural selection or a selection like process such as biased gene conversion strongly affect nucleotide content in bacteria.

W R Pearson, D J Lipman (1988)
We have developed three computer programs for comparisons of protein and DNA sequences. They can be used to search sequence data bases, evaluate similarity scores, and identify periodic structures based on local sequence similarity. The FASTA program is a more sensitive derivative of the FASTP program, which can be used to search protein or DNA sequence data bases and can compare a protein sequence to a DNA sequence data base by translating the DNA data base as it is searched. FASTA includes an additional step in the calculation of the initial pairwise similarity score that allows multiple regions of similarity to be joined to increase the score of related sequences. The RDF2 program can be used to evaluate the significance of similarity scores using a shuffling method that preserves local sequence composition. The LFASTA program can display all the regions of local similarity between two sequences with scores greater than a threshold, using the same scoring parameters and a similar alignment algorithm; these local similarities can be displayed as a "graphic matrix" plot or as individual alignments. In addition, these programs have been generalized to allow comparison of DNA or protein sequences based on a variety of alternative scoring matrices.

The rate and molecular spectrum of spontaneous mutations in Arabidopsis thaliana.

Stephan Ossowski, Korbinian Schneeberger, José Lucas-Lledó … (2010)
To take complete advantage of information on within-species polymorphism and divergence from close relatives, one needs to know the rate and the molecular spectrum of spontaneous mutations. To this end, we have searched for de novo spontaneous mutations in the complete nuclear genomes of five Arabidopsis thaliana mutation accumulation lines that had been maintained by single-seed descent for 30 generations. We identified and validated 99 base substitutions and 17 small and large insertions and deletions. Our results imply a spontaneous mutation rate of 7 x 10(-9) base substitutions per site per generation, the majority of which are G:C-->A:T transitions. We explain this very biased spectrum of base substitution mutations as a result of two main processes: deamination of methylated cytosines and ultraviolet light-induced mutagenesis.