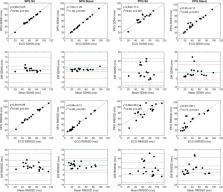 Heart rate variability (HRV) provides insight into cardiovascular health and autonomic function. Electrocardiography (ECG) provides gold standard HRV measurements but is inconvenient for continuous acquisition when monitored from the extremities. Optical techniques such as photoplethysmography (PPG), often found in health and wellness trackers for heart rate measurements, have been used to estimate HRV peripherally but decline in accuracy during increased physical stress. Speckleplethysmography (SPG) is a recently introduced optical technique that provides benefits over PPG, such as increased signal amplitude and reduced susceptibility to temperature-induced vasoconstriction. In this research, we compare SPG and PPG to ECG for estimation of HRV during an orthostatic challenge performed by 17 subjects. We find that SPG estimations of HRV are highly correlated to ECG HRV for both time and frequency domain parameters and provide increased accuracy over PPG estimations of HRV. The results suggest SPG measurements are a viable alternative for HRV estimation when ECG measurements are impractical.

DAVID NUNAN,  GAVIN SANDERCOCK,  DAVID BRODIE (2010)
Heart rate variability (HRV) is a known risk factor for mortality in both healthy and patient populations. There are currently no normative data for short-term measures of HRV. A thorough review of short-term HRV data published since 1996 was therefore performed. Data from studies published after the 1996 Task Force report (i.e., between January 1997 and September 2008) and reporting short-term measures of HRV obtained in normally healthy individuals were collated and factors underlying discrepant values were identified. Forty-four studies met the pre-set inclusion criteria involving 21,438 participants. Values for short-term HRV measures from the literature were lower than Task Force norms. A degree of homogeneity for common measures of HRV in healthy adults was shown across studies. A number of studies demonstrate large interindividual variations (up to 260,000%), particularly for spectral measures. A number of methodological discrepancies underlined disparate values. These include a systematic failure within the literature (a) to recognize the importance of RR data recognition/editing procedures and (b) to question disparate HRV values observed in normally healthy individuals. A need for large-scale population studies and a review of the Task Force recommendations for short-term HRV that covers the full-age spectrum were identified. Data presented should be used to quantify reference ranges for short-term measures of HRV in healthy adult populations but should be undertaken with reference to methodological factors underlying disparate values. Recommendations for the measurement of HRV require updating to include current technologies. ©2010, The Authors. Journal compilation ©2010 Wiley Periodicals, Inc.

M. Orini,  L. T. Mainardi,  P. Laguna … (2010)
In this paper we assessed the possibility of using the pulse rate variability (PRV) extracted from the photoplethysmography signal as an alternative measurement of the HRV signal in non-stationary conditions. The study is based on analysis of the changes observed during a tilt table test in the heart rate modulation of 17 young subjects. First, the classical indices of HRV analysis were compared to the indices from PRV in intervals where stationarity was assumed. Second, the time-varying spectral properties of both signals were compared by time-frequency (TF) and TF coherence analysis. Third, the effect of replacing PRV with HRV in the assessment of the changes of the autonomic modulation of the heart rate was considered. Time-invariant HRV and PRV indices showed no statistically significant differences (p > 0.05) and high correlation (>0.97). Time-frequency analysis revealed that the TF spectra of both signals were highly correlated (0.99 +/- 0.01); the difference between the instantaneous power, in the LF and HF bands, obtained from HRV and PRV was small (<10(-3) s(-2)) and their temporal patterns were highly correlated (0.98 +/- 0.04 and 0.95 +/- 0.06 in the LF and HF bands, respectively) and TF coherence in the LF and HF bands was high (0.97 +/- 0.04 and 0.89 +/- 0.08, respectively). Finally, the instantaneous power in the LF band was observed to significantly increase during head-up tilt by both HRV and PRV analysis. These results suggest that although some differences in the time-varying spectral indices extracted from HRV and PRV exist, mainly in the HF band associated with respiration, PRV could be used as a surrogate of HRV during non-stationary conditions, at least during the tilt table test.