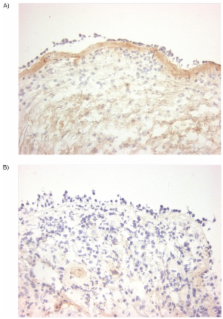 Reticular basement membrane (RBM) thickening has been variably associated with asthma and chronic obstructive pulmonary disease (COPD). Even if RBM thickness is similar in both diseases, its composition might still differ.

To assess whether RBM thickness and composition differ between asthma and COPD.

We investigated 24 allergic asthmatics (forced expiratory volume in one second [FEV 1] 92% predicted), and 17 nonallergic COPD patients (FEV 1 60% predicted), and for each group a control group of similar age and smoking habits (12 and 10 persons, respectively). Snap-frozen sections of bronchial biopsies were stained with hematoxylin/eosin and for collagen I, III, IV, V, laminin and tenascin. RBM thickening was assessed by digital image analysis. Relative staining intensity of each matrix component was determined.

Characteristics of the inflammation in biopsies from large airways of subjects with asthma and subjects with chronic airflow limitation.

A Woolcock,  S Ollerenshaw (1992)
Although the characteristics of the histopathologic changes present in subjects who die with status asthmaticus are well documented, the structural changes present in subjects with mild to moderately severe asthma are not well described and the inflammatory changes in the large airways of subjects with chronic airflow limitation (CAL) and asthma have not been compared. Ten subjects with asthma, five taking inhaled corticosteroids and five taking beta 2-agonist aerosols, five subjects with CAL, and four subjects with no respiratory illness had four biopsies taken from airways 10 mm in diameter. The length of intact epithelium, thickness of basement membrane, and number of lymphocytes, neutrophils, eosinophils, plasma cells, monocytes, and mast cells in the lamina propria, bronchial smooth muscle, and submucosa were measured. Intact epithelium was present along 56% of the basement membrane in the asthmatic subjects, along 54% in the subjects with CAL, and along 84% in the control subjects. In the asthmatic subjects there was no direct relationship between the severity of asthma and the amount of epithelial cell loss or the number of inflammatory cells. The basement membrane was thickened in all asthmatic subjects but not in normal subjects or subjects with CAL. There was a significant increase in the number of lymphocytes, eosinophils, and mast cells in the asthmatic airways, particularly in the lamina propria, compared with the CAL subjects. There were no eosinophils or mast cells in any of the control subjects. The airways of subjects with CAL contained significantly more inflammatory cells than the control subjects. Subjects with asthma on inhaled corticosteroids had significantly fewer lymphocytes, eosinophils, and mast cells compared with subjects taking only beta 2-agonists.(ABSTRACT TRUNCATED AT 250 WORDS)

Lianne Postma,  G Drok,  W Timens … (1998)
Asthma at night is characterized by a nocturnal increase in airway obstruction. It has been hypothesized that nocturnal asthma results from an increase in airway wall inflammation at night. However, studies on inflammatory cells in bronchoalveolar lavage (BAL) fluid and bronchial biopsies have produced conflicting data. This study assessed inflammatory cell numbers at 16:00 h and 04:00 h in bronchial biopsies of 13 healthy controls, 15 asthmatic patients with peak expiratory flow (PEF) variation 15%. There was no significant increase at night in the number of CD3, CD4, CD8, CD25, AAI (tryptase) and EG2-immunopositive cells in the submucosa in both groups. Numbers of EG2-positive cells in the two asthmatic groups were significantly higher than in healthy controls, both at 16:00 h (p 15% than in asthmatics with PEF variation 15% and 15% suffer from a higher overall severity of bronchial inflammation at night and during the day.

Structural changes of the airway wall impair respiratory function, even in mild asthma.