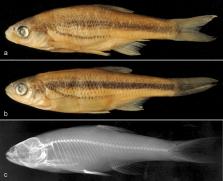 The first voucher-confirmed record of Alburnus scoranza and the first morphological description of Alburnoides for the Vjosa River system in Albania are reported with a brief discussion of the diagnostic morphological traits and taxonomic assignment of both species.

Silvia Perea, Madelaine Böhme, Primož Zupančič … (2010)
Background Leuciscinae is a subfamily belonging to the Cyprinidae fish family that is widely distributed in Circum-Mediterranean region. Many efforts have been carried out to deciphering the evolutionary history of this group. Thus, different biogeographical scenarios have tried to explain the colonization of Europe and Mediterranean area by cyprinids, such as the "north dispersal" or the "Lago Mare dispersal" models. Most recently, Pleistocene glaciations influenced the distribution of leuciscins, especially in North and Central Europe. Weighing up these biogeographical scenarios, this paper constitutes not only the first attempt at deciphering the mitochondrial and nuclear relationships of Mediterranean leuciscins but also a test of biogeographical hypotheses that could have determined the current distribution of Circum-Mediterranean leuciscins. Results A total of 4439 characters (mitochondrial + nuclear) from 321 individuals of 176 leuciscine species rendered a well-supported phylogeny, showing fourteen main lineages. Analyses of independent mitochondrial and nuclear markers supported the same main lineages, but basal relationships were not concordant. Moreover, some incongruence was found among independent mitochondrial and nuclear phylogenies. The monophyly of some poorly known genera such as Pseudophoxinus and Petroleuciscus was rejected. Representatives of both genera belong to different evolutionary lineages. Timing of cladogenetic events among the main leuciscine lineages was gained using mitochondrial and all genes data set. Conclusions Adaptations to a predatory lifestyle or miniaturization have superimposed the morphology of some species. These species have been separated into different genera, which are not supported by a phylogenetic framework. Such is the case of the genera Pseudophoxinus and Petroleuciscus, which real taxonomy is not well known. The diversification of leuciscine lineages has been determined by intense vicariant events following the paleoclimatological and hydrogeological history of Mediterranean region. We propose different colonization models of Mediterranean region during the early Oligocene. Later vicariance events promoted Leuciscinae diversification during Oligocene and Miocene periods. Our data corroborate the presence of leuciscins in North Africa before the Messinian salinity crisis. Indeed, Messinian period appears as a stage of gradually Leuciscinae diversification. The rise of humidity at the beginning of the Pliocene promoted the colonization and posterior isolation of newly established freshwater populations. Finally, Pleistocene glaciations determined the current European distribution of some leuciscine species.

David J Durand, B Guinand, A Imsiridou … (1999)
Phylogenetic relationships among Greek populations of the chub, Leuciscus cephalus, were investigated using 600 bp of the cytochrome b gene. The aim of this study was to test the assumption that the main difference in ichthyological composition between both sides of the Balkan Peninsula is directly linked to differences in the dispersion mechanisms used by fish in order to extend their distribution range. Phylogenetic and nested clade analyses clearly showed that populations in Greece are significantly differentiated. Greek populations were found to descend from three lineages in three geographical provinces: Western, Central, and Eastern Greece. The chub reached Western Greece at the beginning of the Pleistocene and Eastern Greece during the mid-Pleistocene. Chub dispersion occurred mainly by river confluence due to sea level lowering and river capture in Western Greece and sea dispersal with low-salinity conditions within the Aegean Sea in Eastern Greece. However, in Central Greece, the original mtDNA lineage has presumably been lost owing to a genetic introgression following a second invasion from the Danube during the final stage of the last glaciation. This study provides new elements for a better understanding of the composition of the contemporary ichthyofauna in Greece and highlights possible evolutionary mechanisms responsible for the high endemism rate in the Western Greek biogeographic province. Copyright 1999 Academic Press.

S. ZOGARIS, A.N Economou, S. GIAKOUMI … (2012)
Distribution records (historical, contemporary) for native and non-native freshwater fish species from 105 hydrographic basin areas were compiled and analysed in order to develop a nation-wide inventory (including transboundary river basins). Overall, 162 species, including diadromous and euryhaline, with documented occurrence records in freshwaters, and taxa of unclarified taxonomic status, are accommodated in the distributional compilation. An annotated checklist summarises the confirmed ichthyofauna of Greek freshwaters (161 species); a provisional supplementary list contains species recorded in brackish waters (55 species). In comparison to the last published (1991) checklist of freshwater fish of Greece, the present checklist shows an increase in species number of 53% (56 species). This increase has resulted mainly from taxonomic re-evaluations of existing taxa on the basis of new information and adoption of a new systematic concept. The current trend, as reflected in recent ichthyological publications, is towards abandonment of the biological species concept (BSC) and adoption of the phylogenetic species concept (PSC) for the delineation of species boundaries. The practical implications of the change in species concept on biodiversity conservation and watershed management are discussed. An overview of the composition and characteristics of the freshwater fish fauna of Greece is provided, especially with regard to the native and introduced status of species, and the spatial patterns of species richness and endemism. This systematic inventory may assist in efforts to develop nation-wide surface water bioassessment tools within the demands of the Water Framework Directive (WFD); it may further promote biodiversity conservation and biologically-orientated fishery management approaches.