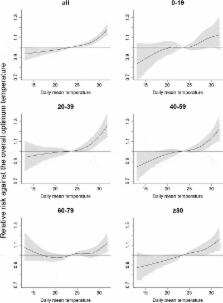 Objectives: This study aimed to examine the association of temperature with ambulance dispatches due to acute illnesses, stratified by age group. Specifically, we explored the optimum temperature, at which the relative health risks were found to be the lowest, and quantified the health risk associated with higher temperatures among different age groups.

Methods: We used the data for ambulance dispatches in Fukuoka, Japan, during May and September from 2005 to 2012. The data were grouped according to age in 20-year increments. We explored the pattern of the association of ambulance dispatches with temperature using a smoothing spline curve to identify the optimum temperature for each age group. Then, we applied a distributed lag nonlinear model to estimate the risks of the 85th–95th percentile temperature relative to the overall optimum temperature, for each age group.

Conclusions: We did not find any definite difference in the effect of high temperature on ambulance dispatches for different age groups. However, more measures should be taken for younger and middle-aged people to avoid heat-related illnesses.

Kim Knowlton,  Miriam Rotkin-Ellman,  Galatea King … (2008)
Background Climate models project that heat waves will increase in frequency and severity. Despite many studies of mortality from heat waves, few studies have examined morbidity. Objectives In this study we investigated whether any age or race/ethnicity groups experienced increased hospitalizations and emergency department (ED) visits overall or for selected illnesses during the 2006 California heat wave. Methods We aggregated county-level hospitalizations and ED visits for all causes and for 10 cause groups into six geographic regions of California. We calculated excess morbidity and rate ratios (RRs) during the heat wave (15 July to 1 August 2006) and compared these data with those of a reference period (8–14 July and 12–22 August 2006). Results During the heat wave, 16,166 excess ED visits and 1,182 excess hospitalizations occurred statewide. ED visits for heat-related causes increased across the state [RR = 6.30; 95% confidence interval (CI), 5.67–7.01], especially in the Central Coast region, which includes San Francisco. Children (0–4 years of age) and the elderly (≥ 65 years of age) were at greatest risk. ED visits also showed significant increases for acute renal failure, cardiovascular diseases, diabetes, electrolyte imbalance, and nephritis. We observed significantly elevated RRs for hospitalizations for heat-related illnesses (RR = 10.15; 95% CI, 7.79–13.43), acute renal failure, electrolyte imbalance, and nephritis. Conclusions The 2006 California heat wave had a substantial effect on morbidity, including regions with relatively modest temperatures. This suggests that population acclimatization and adaptive capacity influenced risk. By better understanding these impacts and population vulnerabilities, local communities can improve heat wave preparedness to cope with a globally warming future.

Models for the relationship between ambient temperature and daily mortality.

Peter Armstrong (2006)
Ambient temperature is an important determinant of daily mortality that is of interest both in its own right and as a confounder of other determinants investigated using time-series regressions, in particular, air pollution. The temperature-mortality relationship is often found to be substantially nonlinear and to persist (but change shape) with increasing lag. We review and extend models for such nonlinear multilag forms. Popular models for mortality by temperature at given lag include polynomial and natural cubic spline curves, and the simple but more easily interpreted linear thresholds model, comprising linear relationships for temperatures below and above thresholds and a flat middle section. Most published analyses that have allowed the relationship to persist over multiple lags have done so by assuming that spline or threshold models apply to mean temperature in several lag strata (e.g., lags 0-1, 2-6, and 7-13). However, more flexible models are possible, and a modeling framework using products of basis functions ("cross-basis" functions) suggests a wide range, some used previously and some new. These allow for stepped or smooth changes in the model coefficients as lags increase. Applying a range of models to data from London suggest evidence for relationships up to at least 2 weeks' lag, with smooth models fitting best but lag-stratified threshold models allowing the most direct interpretation. A wide range of multilag nonlinear temperature-mortality relationships can be modeled. More awareness of options should improve investigation of these relationships and help control for confounding by them.

William R. Keatinge,  Susan Coleshaw,  John Easton … (1986)
Recorded deaths from coronary and cerebral thrombosis rise markedly in heat waves. In a British heat wave with little or no distortion due to air-conditioning, outside temperatures of 34.6 degrees C (maximum) and 20.8 degrees C (minimum) were followed by peak mortalities from coronary and cerebral thrombosis one to two days later. Experimental exposure of volunteers to moving air at 41 degrees C for six hours caused core temperature to rise 0.84 degree C, weight to fall 1.83 kg with sweating despite access to water, heart rate to increase 32 beats per minute, and arterial pressure to fall, particularly on standing. The red blood cell count increased 9 percent, and blood viscosity increased 24 percent, mostly after the first hour. The platelet count rose 18 percent, and the platelet volume fell, mostly in the first hour. The plasma cholesterol level increased 14 percent without a change in distribution among lipoprotein fractions. The changes seem able to explain the increased mortality from arterial thrombosis in hot weather.