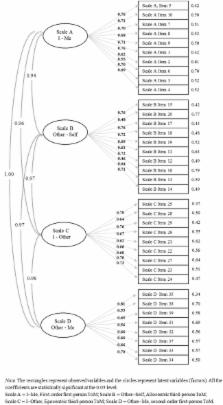 This research aimed at the evaluation of the psychometric properties of the Theory of Mind Assessment Scale (Th.o.m.a.s.). Th.o.m.a.s. is a semi-structured interview meant to evaluate a person's Theory of Mind (ToM). It is composed of several questions organized in four scales, each focusing on one of the areas of knowledge in which such faculty may manifest itself: Scale A (I-Me) investigates first-order first-person ToM; Scale B (Other-Self) investigates third-person ToM from an allocentric perspective; Scale C (I-Other) again investigates third-person ToM, but from an egocentric perspective; and Scale D (Other-Me) investigates second-order ToM. The psychometric proprieties of Th.o.m.a.s. were evaluated in a sample of 156 healthy persons: 80 preadolescent and adolescent (aged 11–17 years, 42 females) and 76 adults (aged from 20 to 67 years, 35 females). Th.o.m.a.s. scores show good inter-rater agreement and internal consistency; the scores increase with age. Evidence of criterion validity was found as Scale B scores were correlated with those of an independent instrument for the evaluation of ToM, the Strange Stories task. Confirmatory factor analysis (CFA) showed good fit of the four-factors theoretical model to the data, although the four factors were highly correlated. For each of the four scales, Rasch analyses showed that, with few exceptions, items fitted the Partial credit model and their functioning was invariant for gender and age. The results of this study, along with those of previous researches with clinical samples, show that Th.o.m.a.s. is a promising instrument to assess ToM in different populations.

Recognition of faux pas by normally developing children and children with Asperger syndrome or high-functioning autism.

Stephen O’Riordan,  Simon Baron-Cohen,  Jonathan Jones … (1999)
Most theory of mind (ToM) tests are designed for subjects with a mental age of 4-6 years. There are very few ToM tests for subjects who are older or more able than this. We report a new test of ToM, designed for children 7-11 years old. The task involves recognizing faux pas. Study 1 tested 7-9, and 11-year-old normal children. Results showed that the ability to detect faux pas developed with age and that there was a differential developmental profile between the two sexes (female superiority). Study 2 tested children with Asperger syndrome (AS) or high-functioning autism (HFA), selected for being able to pass traditional 4- to 6-year level (first- and second-order) false belief tests. Results showed that whereas normal 9- to 11-year-old children were skilled at detecting faux pas, children with AS or HFA were impaired on this task. Study 3 reports a refinement in the test, employing control stimuli. This replicated the results from Study 2. Some patients with AS or HFA were able to recognize faux pas but still produced them. Future research should assess faux pas production.