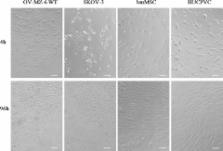 Cell proliferation is a critical and frequently studied feature of molecular biology in cancer research. Therefore, various assays are available using different strategies to measure cell proliferation. Metabolic assays such as AlamarBlue, water-soluble tetrazolium salt and 3-(4,5-dimethylthiazol-2-yl)-2,5-diphenyl tetrazolium bromide, which were originally developed to determine cell toxicity, are used to assess cell numbers. Additionally, proliferative activity can be determined by quantification of DNA content using fluorophores such as CyQuant and PicoGreen. Referring to data published in high ranking cancer journals, these assays were applied in 945 publications over the past 14 years to examine the proliferative behaviour of diverse cell types. In these studies, however, mainly metabolic assays were used to quantify changes in cell growth yet these assays may not accurately reflect cellular proliferation rates due to a miscorrelation of metabolic activity and cell number. Testing this hypothesis, we compared the metabolic activity of different cell types, human cancer cells and primary cells, over a time period of 4 days using AlamarBlue and the fluorometric assays CyQuant and PicoGreen to determine their DNA content. Our results show certain discrepancies in terms of over-estimation of cell proliferation with respect to the metabolic assay in comparison to DNA binding fluorophores.

Investigation of the Alamar Blue (resazurin) fluorescent dye for the assessment of mammalian cell cytotoxicity.

I Wilson,  T Orton,  F Pognan … (2000)
We show here the identity of Alamar Blue as resazurin. The 'resazurin reduction test' has been used for about 50 years to monitor bacterial and yeast contamination of milk, and also for assessing semen quality. Resazurin (blue and nonfluorescent) is reduced to resorufin (pink and highly fluorescent) which is further reduced to hydroresorufin (uncoloured and nonfluorescent). It is still not known how this reduction occurs, intracellularly via enzyme activity or in the medium as a chemical reaction, although the reduced fluorescent form of Alamar Blue was found in the cytoplasm and of living cells nucleus of dead cells. Recently, the dye has gained popularity as a very simple and versatile way of measuring cell proliferation and cytotoxicity. This dye presents numerous advantages over other cytotoxicity or proliferation tests but we observed several drawbacks to the routine use of Alamar Blue. Tests with several toxicants in different cell lines and rat primary hepatocytes have shown accumulation of the fluorescent product of Alamar Blue in the medium which could lead to an overestimation of cell population. Also, the extensive reduction of Alamar Blue by metabolically active cells led to a final nonfluorescent product, and hence an underestimation of cellular activity.

T Orfeo,  J Føgh (1977)
One hundred and twenty-seven cultured human tumor cell lines produced tumors after sc inoculation of 1-20 million cells into nude mice. They included 56 carcinoma lines, 14 sarcoma lines, and 57 lines from miscellaneous tumors and were all glucose-6-phosphate dehydrogenase type B. Twenty-nine percent of the lines produced tumors of 1 cm3 size within 1 month and 41% in the second month after inoculation. The histopathology correlated with the human tumor of origin in all cases.

P Bullock,  R. Hamid,  L Rabadi … (2004)
The performance of alamar blue and 3-[4,5-dimethylthiazol-2-yl]-2,5-diphenyl tetrazolium bromide (MTT) cell viability assays in a high through-put format were compared. A total of 117 drugs chosen for their wide range of therapeutic areas were screened at 10 microM using both assays in human hepatoma cell line HepG2. Except for terfenadine and astemizole, which performed consistently in both assays, the alamar blue assay was slightly more sensitive than the MTT assay for most compounds. The MTT assay was less sensitive detecting an effect for daunorubicin and trifluoperazine. Seven drugs, astemizole, daunorubicin, ellipticine, fluphenazine, terfenadine, thioridazine and trifluoperazine, had percent viability results of 55% or less in the alamar blue assay at the single point screen. These were re-tested in both assays for reconfirmation of cytotoxicity and determination of the EC50 values. Except for daunorubicin, the EC50 values were comparable in both assays. Based on these results and the Z'-factor assessment of assay quality, both assays provided useful information to identify in vitro cytotoxic drugs at early stages of drug candidate selection. However, careful interpretation of data is warranted due to the possibility of false positive or negative results caused by inducers and/or inhibitors of metabolic enzymes that are responsible for transformation of cell toxicity end points, as we demonstrated using dicumarol.