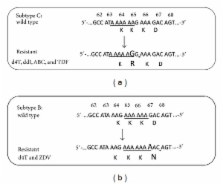 The vast majority of reports on drug resistance deal with subtype B infections in developed countries, and this is largely due to historical delays in access to antiretroviral therapy (ART) on a worldwide basis. This notwithstanding the concept that naturally occurring polymorphisms among different non-B subtypes can affect HIV-1 susceptibility to antiretroviral drugs (ARVs) is supported by both enzymatic and virological data. These findings suggest that such polymorphisms can affect both the magnitude of resistance conferred by some major mutations as well as the propensity to acquire certain resistance mutations, even though such differences are sometimes difficult to demonstrate in phenotypic assays. It is mandatory that tools are optimized to assure accurate measurements of drug susceptibility in non-B subtypes and to recognize that each subtype may have a distinct resistance profile and that differences in resistance pathways may also impact on cross-resistance and the choice of regimens to be used in second-line therapy. Although responsiveness to first-line therapy should not theoretically be affected by considerations of viral subtype and drug resistance, well-designed long-term longitudinal studies involving patients infected by viruses of different subtypes should be carried out.

Jean Nachega,  Christine Chaisson,  Gary Maartens … (2007)
Adherence of 95% or more to unboosted protease regimens is required for optimal virologic suppression in HIV-1-infected patients. Whether the same is true for nonnucleoside reverse transcriptase inhibitor (NNRTI)-based therapy is unclear. To assess the relationship between adherence to NNRTI-based therapy and viral load in treatment-naive patients. Observational cohort study. Private-sector HIV and AIDS disease management program in South Africa. 2821 adults infected with HIV who began NNRTI-based therapy between January 1998 and March 2003 (2764 patients [98%] were enrolled after December 2000). Adherence was assessed by monthly pharmacy claims. The primary end point was sustained viral load suppression ( 400 copies/mL). The median follow-up period was 2.2 years (interquartile range, 1.7 to 2.7 years). The proportion of patients with sustained viral load suppression ranged from 13% (41 of 325 patients) in patients who filled less than 50% of antiretroviral drug prescriptions to 73% (725 of 997 patients) in those who filled 100% of antiretroviral drug prescriptions. Each 10% increase in pharmacy claim adherence greater than 50% was associated with a mean absolute increase of 0.10 in the proportion of patients with sustained virologic suppression (P 0.20 x 10(9) cells/L), baseline viral load greater than 10(5) copies/mL (hazard ratio, 1.39 [CI, 1.14 to 1.70]), nevirapine-based regimen (hazard ratio, 1.43 [CI, 1.16 to 1.75]), and low pharmacy claim adherence (hazard ratio, 1.58 [CI, 1.48 to 1.69], per 10% decrease in adherence to 50%). Observational study with adherence stratification at study end and lack of standardized timing for outcome measurement. Virologic outcomes improve in a linear dose-response manner as adherence to NNRTI-based regimens increases beyond 50%.

Sam Phiri,  J Eron,  Johnstone Kumwenda … (2009)
Over 150,000 Malawians have started antiretroviral therapy (ART), in which first-line therapy is stavudine/lamivudine/nevirapine. We evaluated drug resistance patterns among patients failing first-line ART on the basis of clinical or immunological criteria in Lilongwe and Blantyre, Malawi. Patients meeting the definition of ART failure (new or progressive stage 4 condition, CD4 cell count decline more than 30%, CD4 cell count less than that before treatment) from January 2006 to July 2007 were evaluated. Among those with HIV RNA of more than 1000 copies/ml, genotyping was performed. For complex genotype patterns, phenotyping was performed. Ninety-six confirmed ART failure patients were identified. Median (interquartile range) CD4 cell count, log10 HIV-1 RNA, and duration on ART were 68 cells/microl (23-174), 4.72 copies/ml (4.26-5.16), and 36.5 months (26.6-49.8), respectively. Ninety-three percent of samples had nonnucleoside reverse transcriptase inhibitor mutations, and 81% had the M184V mutation. The most frequent pattern included M184V and nonnucleoside reverse transcriptase inhibitor mutations along with at least one thymidine analog mutation (56%). Twenty-three percent of patients acquired the K70E or K65R mutations associated with tenofovir resistance; 17% of the patients had pan-nucleoside resistance that corresponded to K65R or K70E and additional resistance mutations, most commonly the 151 complex. Emergence of the K65R and K70E mutations was associated with CD4 cell count of less than 100 cells/microl (odds ratio 6.1) and inversely with the use of zidovudine (odds ratio 0.18). Phenotypic susceptibility data indicated that the nucleoside reverse transcriptase inhibitor backbone with the highest activity for subsequent therapy was zidovudine/lamivudine/tenofovir, followed by lamivudine/tenofovir, and then abacavir/didanosine. When clinical and CD4 cell count criteria are used to monitor first-line ART failure, extensive nucleoside reverse transcriptase inhibitor and nonnucleoside reverse transcriptase inhibitor resistance emerges, with most patients having resistance profiles that markedly compromise the activity of second-line ART.

Characterization of the R263K mutation in HIV-1 integrase that confers low-level resistance to the second-generation integrase strand transfer inhibitor dolutegravir.

Shan Han,  Maureen Oliveira,  S. Underwood … (2012)
Integrase (IN) strand transfer inhibitors (INSTIs) have been developed to inhibit the ability of HIV-1 integrase to irreversibly link the reverse-transcribed viral DNA to the host genome. INSTIs have proven their high efficiency in inhibiting viral replication in vitro and in patients. However, first-generation INSTIs have only a modest genetic barrier to resistance, allowing the virus to escape these powerful drugs through several resistance pathways. Second-generation INSTIs, such as dolutegravir (DTG, S/GSK1349572), have been reported to have a higher resistance barrier, and no novel drug resistance mutation has yet been described for this drug. Therefore, we performed in vitro selection experiments with DTG using viruses of subtypes B, C, and A/G and showed that the most common mutation to emerge was R263K. Further analysis by site-directed mutagenesis showed that R263K does confer low-level resistance to DTG and decreased integration in cell culture without altering reverse transcription. Biochemical cell-free assays performed with purified IN enzyme containing R263K confirmed the absence of major resistance against DTG and showed a slight decrease in 3' processing and strand transfer activities compared to the wild type. Structural modeling suggested and in vitro IN-DNA binding assays show that the R263K mutation affects IN-DNA interactions.