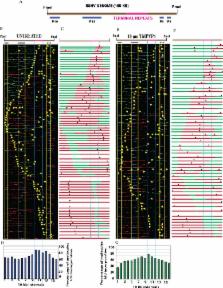 Kaposi's sarcoma associated herpesvirus (KSHV) establishes life-long latent infection by persisting as an extra-chromosomal episome in the infected cells and by maintaining its genome in dividing cells. KSHV achieves this by tethering its epigenome to the host chromosome by latency associated nuclear antigen (LANA), which binds in the terminal repeat (TR) region of the viral genome. Sequence analysis of the TR, a GC-rich DNA element, identified several potential Quadruplex G-Rich Sequences (QGRS). Since quadruplexes have the tendency to obstruct DNA replication, we used G-quadruplex stabilizing compounds to examine their effect on latent DNA replication and the persistence of viral episomes. Our results showed that these G-quadruplex stabilizing compounds led to the activation of dormant origins of DNA replication, with preferential bi-directional pausing of replications forks moving out of the TR region, implicating the role of the G-rich TR in the perturbation of episomal DNA replication. Over time, treatment with PhenDC3 showed a loss of viral episomes in the infected cells. Overall, these data show that G-quadruplex stabilizing compounds retard the progression of replication forks leading to a reduction in DNA replication and episomal maintenance. These results suggest a potential role for G-quadruplex stabilizers in the treatment of KSHV-associated diseases.

Sarah Burge,  Gary Parkinson,  Pascale Hazel … (2006)
G-quadruplexes are higher-order DNA and RNA structures formed from G-rich sequences that are built around tetrads of hydrogen-bonded guanine bases. Potential quadruplex sequences have been identified in G-rich eukaryotic telomeres, and more recently in non-telomeric genomic DNA, e.g. in nuclease-hypersensitive promoter regions. The natural role and biological validation of these structures is starting to be explored, and there is particular interest in them as targets for therapeutic intervention. This survey focuses on the folding and structural features on quadruplexes formed from telomeric and non-telomeric DNA sequences, and examines fundamental aspects of topology and the emerging relationships with sequence. Emphasis is placed on information from the high-resolution methods of X-ray crystallography and NMR, and their scope and current limitations are discussed. Such information, together with biological insights, will be important for the discovery of drugs targeting quadruplexes from particular genes.

Formation of parallel four-stranded complexes by guanine-rich motifs in DNA and its implications for meiosis.

D Sen,  W Gilbert (1988)
We have discovered that single-stranded DNA containing short guanine-rich motifs will self-associate at physiological salt concentrations to make four-stranded structures in which the strands run in parallel fashion. We believe these complexes are held together by guanines bonded to each other by Hoogsteen pairing. Such guanine-rich sequences occur in immunoglobulin switch regions, in gene promoters, and in chromosomal telomeres. We speculate that this self-recognition of guanine-rich motifs of DNA serves to bring together, and to zipper up in register, the four homologous chromatids during meiosis.