An Evo-Devo Approach to Thyroid Hormones in Cerebral and Cerebellar Cortical Development: Etiological Implications for Autism 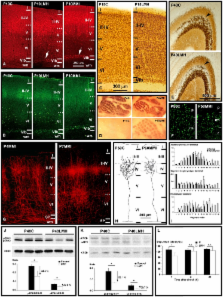 The morphological alterations of cortical lamination observed in mouse models of developmental hypothyroidism prompted the recognition that these experimental changes resembled the brain lesions of children with autism; this led to recent studies showing that maternal thyroid hormone deficiency increases fourfold the risk of autism spectrum disorders (ASD), offering for the first time the possibility of prevention of some forms of ASD. For ethical reasons, the role of thyroid hormones on brain development is currently studied using animal models, usually mice and rats. Although mammals have in common many basic developmental principles regulating brain development, as well as fundamental basic mechanisms that are controlled by similar metabolic pathway activated genes, there are also important differences. For instance, the rodent cerebral cortex is basically a primary cortex, whereas the primary sensory areas in humans account for a very small surface in the cerebral cortex when compared to the associative and frontal areas that are more extensive. Associative and frontal areas in humans are involved in many neurological disorders, including ASD, attention deficit-hyperactive disorder, and dyslexia, among others. Therefore, an evo-devo approach to neocortical evolution among species is fundamental to understand not only the role of thyroid hormones and environmental thyroid disruptors on evolution, development, and organization of the cerebral cortex in mammals but also their role in neurological diseases associated to thyroid dysfunction.

P Rakic (1988)
How the immense population of neurons that constitute the human cerebral neocortex is generated from progenitors lining the cerebral ventricle and then distributed to appropriate layers of distinctive cytoarchitectonic areas can be explained by the radial unit hypothesis. According to this hypothesis, the ependymal layer of the embryonic cerebral ventricle consists of proliferative units that provide a proto-map of prospective cytoarchitectonic areas. The output of the proliferative units is translated via glial guides to the expanding cortex in the form of ontogenetic columns, whose final number for each area can be modified through interaction with afferent input. Data obtained through various advanced neurobiological techniques, including electron microscopy, immunocytochemistry, [3H]thymidine and receptor autoradiography, retrovirus gene transfer, neural transplants, and surgical or genetic manipulation of cortical development, furnish new details about the kinetics of cell proliferation, their lineage relationships, and phenotypic expression that favor this hypothesis. The radial unit model provides a framework for understanding cerebral evolution, epigenetic regulation of the parcellation of cytoarchitectonic areas, and insight into the pathogenesis of certain cortical disorders in humans.

Sheue-yann Cheng,  Jennifer Davis,  J. Leonard (2010)
Cellular actions of thyroid hormone may be initiated within the cell nucleus, at the plasma membrane, in cytoplasm, and at the mitochondrion. Thyroid hormone nuclear receptors (TRs) mediate the biological activities of T(3) via transcriptional regulation. Two TR genes, alpha and beta, encode four T(3)-binding receptor isoforms (alpha1, beta1, beta2, and beta3). The transcriptional activity of TRs is regulated at multiple levels. Besides being regulated by T(3), transcriptional activity is regulated by the type of thyroid hormone response elements located on the promoters of T(3) target genes, by the developmental- and tissue-dependent expression of TR isoforms, and by a host of nuclear coregulatory proteins. These nuclear coregulatory proteins modulate the transcription activity of TRs in a T(3)-dependent manner. In the absence of T(3), corepressors act to repress the basal transcriptional activity, whereas in the presence of T(3), coactivators function to activate transcription. The critical role of TRs is evident in that mutations of the TRbeta gene cause resistance to thyroid hormones to exhibit an array of symptoms due to decreasing the sensitivity of target tissues to T(3). Genetically engineered knockin mouse models also reveal that mutations of the TRs could lead to other abnormalities beyond resistance to thyroid hormones, including thyroid cancer, pituitary tumors, dwarfism, and metabolic abnormalities. Thus, the deleterious effects of mutations of TRs are more severe than previously envisioned. These genetic-engineered mouse models provide valuable tools to ascertain further the molecular actions of unliganded TRs in vivo that could underlie the pathogenesis of hypothyroidism. Actions of thyroid hormone that are not initiated by liganding of the hormone to intranuclear TR are termed nongenomic. They may begin at the plasma membrane or in cytoplasm. Plasma membrane-initiated actions begin at a receptor on integrin alphavbeta3 that activates ERK1/2 and culminate in local membrane actions on ion transport systems, such as the Na(+)/H(+) exchanger, or complex cellular events such as cell proliferation. Concentration of the integrin on cells of the vasculature and on tumor cells explains recently described proangiogenic effects of iodothyronines and proliferative actions of thyroid hormone on certain cancer cells, including gliomas. Thus, hormonal events that begin nongenomically result in effects in DNA-dependent effects. l-T(4) is an agonist at the plasma membrane without conversion to T(3). Tetraiodothyroacetic acid is a T(4) analog that inhibits the actions of T(4) and T(3) at the integrin, including angiogenesis and tumor cell proliferation. T(3) can activate phosphatidylinositol 3-kinase by a mechanism that may be cytoplasmic in origin or may begin at integrin alphavbeta3. Downstream consequences of phosphatidylinositol 3-kinase activation by T(3) include specific gene transcription and insertion of Na, K-ATPase in the plasma membrane and modulation of the activity of the ATPase. Thyroid hormone, chiefly T(3) and diiodothyronine, has important effects on mitochondrial energetics and on the cytoskeleton. Modulation by the hormone of the basal proton leak in mitochondria accounts for heat production caused by iodothyronines and a substantial component of cellular oxygen consumption. Thyroid hormone also acts on the mitochondrial genome via imported isoforms of nuclear TRs to affect several mitochondrial transcription factors. Regulation of actin polymerization by T(4) and rT(3), but not T(3), is critical to cell migration. This effect has been prominently demonstrated in neurons and glial cells and is important to brain development. The actin-related effects in neurons include fostering neurite outgrowth. A truncated TRalpha1 isoform that resides in the extranuclear compartment mediates the action of thyroid hormone on the cytoskeleton.

The many faces of CREB.

William Carlezon,  Eric J. Nestler,  Ronald S. Duman (2005)
The transcription factor CREB is best known for its involvement in learning and memory. However, emerging evidence suggests that CREB activity has very different roles--sometimes beneficial, sometimes detrimental--depending on the brain region involved. Induction of CREB in the hippocampus by antidepressant treatments could contribute to their therapeutic efficacy. By contrast, activation of CREB in the nucleus accumbens and several other regions by drugs of abuse or stress mediates certain aspects of drug addiction, and depressive and anxiety-like behaviors. These complexities suggest that strategies that exploit regional differences in upstream factors or that target specific CREB-regulated genes, rather than CREB itself, could make a promising contribution to the treatment of neuropsychiatric conditions.