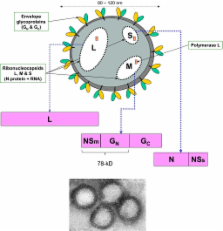 Rift Valley fever (RVF) virus is an arbovirus in the Bunyaviridae family that, from phylogenetic analysis, appears to have first emerged in the mid-19th century and was only identified at the begininning of the 1930s in the Rift Valley region of Kenya. Despite being an arbovirus with a relatively simple but temporally and geographically stable genome, this zoonotic virus has already demonstrated a real capacity for emerging in new territories, as exemplified by the outbreaks in Egypt (1977), Western Africa (1988) and the Arabian Peninsula (2000), or for re-emerging after long periods of silence as observed very recently in Kenya and South Africa. The presence of competent vectors in countries previously free of RVF, the high viral titres in viraemic animals and the global changes in climate, travel and trade all contribute to make this virus a threat that must not be neglected as the consequences of RVF are dramatic, both for human and animal health. In this review, we present the latest advances in RVF virus research. In spite of this renewed interest, aspects of the epidemiology of RVF virus are still not fully understood and safe, effective vaccines are still not freely available for protecting humans and livestock against the dramatic consequences of this virus.

Alexei J. Drummond,  Andrew Rambaut (2007)
Background The evolutionary analysis of molecular sequence variation is a statistical enterprise. This is reflected in the increased use of probabilistic models for phylogenetic inference, multiple sequence alignment, and molecular population genetics. Here we present BEAST: a fast, flexible software architecture for Bayesian analysis of molecular sequences related by an evolutionary tree. A large number of popular stochastic models of sequence evolution are provided and tree-based models suitable for both within- and between-species sequence data are implemented. Results BEAST version 1.4.6 consists of 81000 lines of Java source code, 779 classes and 81 packages. It provides models for DNA and protein sequence evolution, highly parametric coalescent analysis, relaxed clock phylogenetics, non-contemporaneous sequence data, statistical alignment and a wide range of options for prior distributions. BEAST source code is object-oriented, modular in design and freely available at under the GNU LGPL license. Conclusion BEAST is a powerful and flexible evolutionary analysis package for molecular sequence variation. It also provides a resource for the further development of new models and statistical methods of evolutionary analysis.

Relaxed Phylogenetics and Dating with Confidence

The findings reported here are those of the author and do not necessarily represent those of the Centers for Disease Control and Prevention.

This is an Open Access article distributed under the terms of the Creative Commons Attribution-Noncommercial License ( http://creativecommons.org/licenses/by-nc/3.0/), which permits unrestricted use, distribution, and reproduction in any noncommercial medium, provided the original work is properly cited.