The Efficacy and Safety of Abrocitinib as a Treatment Option for Atopic Dermatitis: A Short Report of the Clinical Data 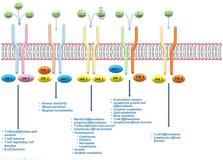 Atopic dermatitis (AD) is a chronic, pruritic, inflammatory skin disease that predominantly affects children. However, it can persist in adulthood and/or start at older ages. Both dysfunction of the epidermal barrier and immune dysregulation are known to play a role in the pathogenesis of AD. In the last years, numerous studies showed that Janus kinase (JAK) enzymes have a key role in AD pathogenesis. Therefore, oral and topical JAK inhibitors are new emerging treatments for AD. We report the data relating to abrocitinib, an oral JAK1 inhibitor. For this purpose, we examined articles already published concerning, in particular, concluded clinical trials. Furthermore, we also report the design of current ongoing clinical trials. The search was carried out considering the main search engines relating to medical literature and clinical trials. From all the data we collected, abrocitinib proved to be an effective drug in significantly reducing the severity of moderate-to-severe AD when compared to placebo. Furthermore, the efficacy was similar to other well-established treatment for AD, such as dupilumab. Adverse events were generally mild; indeed, the drug was definitively suspended only in few patients.

Mechanisms and consequences of Jak–STAT signaling in the immune system

Novel concepts of prevention and treatment of atopic dermatitis through barrier and immune manipulations with implications for the atopic march.

Emma Guttman-Yassky,  Tali Czarnowicki,  James G. Krueger (2017)
Skin barrier abnormalities have been suggested to play an essential role in initiation of early atopic dermatitis (AD). Antigen penetration through a compromised barrier likely leads to increased innate immune responses, antigen-presenting cell stimulation, and priming of overt cutaneous disease. In a TH2-promoting environment, T-cell/B-cell interactions occurring in regional lymph nodes lead to excessive IgE switch. Concurrent redistribution of memory T cells into the circulation not only leads to exacerbation of AD through T-cell skin infiltration but also spreads beyond the skin to initiate the atopic march, which includes food allergy, asthma, and allergic rhinitis. Possible primary interventions to prevent AD are focusing on improving skin barrier integrity, including supplementing barrier function with moisturizers. As for secondary prophylaxis in children with established AD, this can be stratified into prevention of disease exacerbations by using proactive approaches (with either topical corticosteroids or topical calcineurin inhibitors) in mild AD cases or the prevention of other atopic disorders that will probably mandate systemic immunosuppression in severe AD cases.