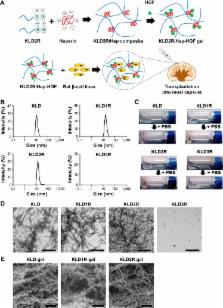 Inflammatory response is a major cause of grafts dysfunction in islet transplantation. Hepatocyte growth factor (HGF) had shown anti-inflammatory activity in multiple diseases. In this study, we aim to deliver HGF by self-assembling peptide/heparin (SAP/Hep) hybrid gel to protect β-cell from inflammatory injury. The morphological and slow release properties of SAPs were analyzed. Rat INS-1 β-cell line was treated with tumor necrosis factor α in vitro and transplanted into rat kidney capsule in vivo, and the viability, apoptosis, function, and inflammation of β-cells were evaluated. Cationic KLD1R and KLD2R self-assembled to nanofiber hydrogel, which showed higher binding affinity for Hep and HGF because of electrostatic interaction. Slow release of HGF from cationic SAP/Hep gel is a two-step mechanism involving binding affinity with Hep and molecular diffusion. In vitro and in vivo results showed that HGF-loaded KLD2R/Hep gel promoted β-cell survival and insulin secretion, and inhibited cell apoptosis, cytokine release, T-cell infiltration, and activation of NFκB/p38 MAPK pathways in β-cells. This study suggested that SAP/Hep gel is a promising carrier for local delivery of bioactive proteins in islet transplantation.

Toshikazu Nakamura,  Kunio Matsumoto,  Katsuya Sakai … (2010)
Liver regeneration depends on the proliferation of mature hepatocytes. In the 1980s, the method for the cultivation of mature hepatocytes provided an opportunity for the discovery of hepatocyte growth factor (HGF) as a protein that is structurally and functionally different from other growth factors. In 1991, the scatter factor, tumor cytotoxic factor, and 3-D epithelial morphogen were identified as HGF, and Met tyrosine kinase was identified as the receptor for HGF. Thus, the connection of apparently unrelated research projects rapidly enriched the research on HGF in different fields. The HGF-Met pathway plays important roles in the embryonic development of the liver and the placenta, in the migration of myogenic precursor cells, and in epithelial morphogenesis. The use of tissue-specific knockout mice demonstrated that in mature tissues the HGF-Met pathway plays a critical role in tissue protection and regeneration, and in providing less susceptibility to chronic inflammation and fibrosis. In various injury and disease models, HGF promotes cell survival, regeneration of tissues, and suppresses and improves chronic inflammation and fibrosis. Drug development using HGF has been challenging, but extensive preclinical studies to address its therapeutic effects have provided significant results sufficient for the development of HGF as a biological drug in the regeneration-based therapy of diseases. Clinical trials using recombinant human HGF protein, or HGF genes, are in progress for the treatment of diseases. © 2011 Journal of Gastroenterology and Hepatology Foundation and Blackwell Publishing Asia Pty Ltd.

David W Piston,  Marcela Brissova,  Stephen E Wright … (2002)
Complete lack of transcription factor PDX-1 leads to pancreatic agenesis, whereas heterozygosity for PDX-1 mutations has been recently noted in some individuals with maturity-onset diabetes of the young (MODY) and in some individuals with type 2 diabetes. To determine how alterations in PDX-1 affect islet function, we examined insulin secretion and islet physiology in mice with one PDX-1 allele inactivated. PDX-1(+/-) mice had a normal fasting blood glucose and pancreatic insulin content but had impaired glucose tolerance and secreted less insulin during glucose tolerance testing. The expression of PDX-1 and glucose transporter 2 in islets from PDX-1(+/-) mice was reduced to 68 and 55%, respectively, whereas glucokinase expression was not significantly altered. NAD(P)H generation in response to glucose was reduced by 30% in PDX-1(+/-) mice. The in situ perfused pancreas of PDX-1(+/-) mice secreted about 45% less insulin when stimulated with 16.7 mm glucose. The K(m) for insulin release was similar in wild type and PDX-1(+/-) mice. Insulin secretion in response to 20 mm arginine was unchanged; the response to 10 nm glucagon-like peptide-1 was slightly increased. However, insulin secretory responses to 10 mm 2-ketoisocaproate and 20 mm KCl were significantly reduced (by 61 and 66%, respectively). These results indicate that a modest reduction in PDX-1 impairs several events in glucose-stimulated insulin secretion (such as NAD(P)H generation, mitochondrial function, and/or mobilization of intracellular Ca(2+)) and that PDX-1 is important for normal function of adult pancreatic islets.