Impact of Article Page Count and Number of Authors on Citations in Disability Related Fields: A Systematic Review Article 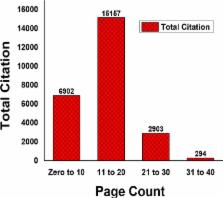 Citation metrics and total publications in a field has become the gold standard for rating researchers and viability of a field. Hence, stimulating demand for citation has led to a search for useful strategies to improve performance metric index. Meanwhile, title, abstract and morphologic qualities of the articles attract researchers to scientific publications. Yet, there is relatively little understanding of the citation trend in disability related fields. We aimed to provide an insight into the factors associated with citation increase in this field. Additionally, we tried to know at what page number an article might appear attractive to disability researchers needs. Thus, our focus is placed on the article page count and the number of authors contributing to the fields per article.

To this end, we evaluated the quantitative characteristics of top cited articles in the fields with a total citation (≥50) in the Web of Science (WoS) database. Using one-way independent ANOVA, data extracted spanning a period of 1980–2015 were analyzed, while the non-parametric data analysis uses Kruskal-Walis test.

Articles with 11 to 20 pages attract more citations followed by those within the range of zero to 10. Articles with upward 21 pages are the least cited. Surprisingly, articles with more than two authors are significantly ( P<0.05) less cited and the citation decreases as the number of authors increased.

Collaborative studies enjoy wider utilization and more citation, yet discounted merit of additional pages and limited collaborative research in disability field is revealed in this study.

Nikolaos Patsopoulos,  Apostolos Analatos,  John Ioannidis (2005)
The relative merits of various study designs and their placement in hierarchies of evidence are often discussed. However, there is limited knowledge about the relative citation impact of articles using various study designs. To determine whether the type of study design affects the rate of citation in subsequent articles. We measured the citation impact of articles using various study designs--including meta-analyses, randomized controlled trials, cohort studies, case-control studies, case reports, nonsystematic reviews, and decision analysis or cost-effectiveness analysis--published in 1991 and in 2001 for a sample of 2646 articles. The citation count through the end of the second year after the year of publication and the total received citations. Meta-analyses received more citations than any other study design both in 1991 (P<.05 for all comparisons) and in 2001 (P<.001 for all comparisons) and both in the first 2 years and in the longer term. More than 10 citations in the first 2 years were received by 32.4% of meta-analyses published in 1991 and 43.6% of meta-analyses published in 2001. Randomized controlled trials did not differ significantly from epidemiological studies and nonsystematic review articles in 1991 but clearly became the second-cited study design in 2001. Epidemiological studies, nonsystematic review articles, and decision and cost-effectiveness analyses had relatively similar impact; case reports received negligible citations. Meta-analyses were cited significantly more often than all other designs after adjusting for year of publication, high journal impact factor, and country of origin. When limited to studies addressing treatment effects, meta-analyses received more citations than randomized trials. Overall, the citation impact of various study designs is commensurate with most proposed hierarchies of evidence.

R. Brian Haynes,  J McKinlay,  K A McKibbon … (2008)
To determine if citation counts at two years could be predicted for clinical articles that pass basic criteria for critical appraisal using data within three weeks of publication from external sources and an online article rating service. Retrospective cohort study. Online rating service, Canada. 1274 articles from 105 journals published from January to June 2005, randomly divided into a 60:40 split to provide derivation and validation datasets. 20 article and journal features, including ratings of clinical relevance and newsworthiness, routinely collected by the McMaster online rating of evidence system, compared with citation counts at two years. The derivation analysis showed that the regression equation accounted for 60% of the variation (R2=0.60, 95% confidence interval 0.538 to 0.629). This model applied to the validation dataset gave a similar prediction (R2=0.56, 0.476 to 0.596, shrinkage 0.04; shrinkage measures how well the derived equation matches data from the validation dataset). Cited articles in the top half and top third were predicted with 83% and 61% sensitivity and 72% and 82% specificity. Higher citations were predicted by indexing in numerous databases; number of authors; abstraction in synoptic journals; clinical relevance scores; number of cited references; and original, multicentred, and therapy articles from journals with a greater proportion of articles abstracted. Citation counts can be reliably predicted at two years using data within three weeks of publication.

Predictors of citations in the urological literature.

Megan L. Willis,  Clinton Bahler,  M Neuberger … (2011)
To assess the factors associated with increased citation rates in the urological literature by reviewing articles published in the four major urological journals to help authors improve the impact of their work. A random sample of 200 original research articles published between January and June 2004 was analysed from The Journal of Urology, Urology, European Urology and BJU International. Study information was abstracted by two independent reviewers and citation counts within 4 years of publication were collected using Web of Science(TM) . Study characteristics and citation rates were analysed using median and interquartile ranges (IQRs), and logistic regression analysis was used to evaluate which factors predicted greater citation rates. The overall median number of citations per published article was 6.0 (IQR 3-12). After univariate analysis, we found that study design, study topic, continent of origin and sample size were associated with greater median citation rates. In a multivariate linear regression model, study design and study topic (oncology) predicted increased citation rates. Randomized controlled trials were cited a median of 13.5 times and were the strongest predictor of citation rates with an odds ratio of 115.5 (95% confidence interval 9.4-1419.6). Citation rates are associated with study design and study topic in the urological literature. Authors may improve the impact of their work by designing clinical studies with greater methodological safeguards against bias. © 2011 THE AUTHORS. BJU INTERNATIONAL © 2011 BJU INTERNATIONAL.

This work is licensed under a Creative Commons Attribution-NonCommercial 3.0 Unported License which allows users to read, copy, distribute and make derivative works for non-commercial purposes from the material, as long as the author of the original work is cited properly.