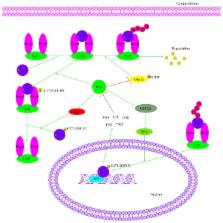 It has long been recognized that an increase of reactive oxygen species (ROS) can modify the cell-signaling proteins and have functional consequences, which successively mediate pathological processes such as atherosclerosis, diabetes, unchecked growth, neurodegeneration, inflammation, and aging. While numerous articles have demonstrated the impacts of ROS on various signaling pathways and clarify the mechanism of action of cell-signaling proteins, their influence on the level of intracellular ROS, and their complex interactions among multiple ROS associated signaling pathways, the systemic summary is necessary. In this review paper, we particularly focus on the pattern of the generation and homeostasis of intracellular ROS, the mechanisms and targets of ROS impacting on cell-signaling proteins (NF- κB, MAPKs, Keap1-Nrf2-ARE, and PI3K-Akt), ion channels and transporters (Ca 2+ and mPTP), and modifying protein kinase and Ubiquitination/Proteasome System.

The renaissance of GSK3.

Joshua Cohen,  S Frame (2001)
Glycogen synthase kinase 3 (GSK3) was initially described as a key enzyme involved in glycogen metabolism, but is now known to regulate a diverse array of cell functions. The study of the substrate specificity and regulation of GSK3 activity has been important in the quest for therapeutic intervention.

NRF2 and KEAP1 mutations: permanent activation of an adaptive response in cancer.

John Hayes,  Michael McMahon (2009)
Transcription factor nuclear factor-erythroid 2-related factor 2 (NRF2) controls cellular adaptation to oxidants and electrophiles by inducing antioxidant and detoxification genes in response to redox stress. NRF2 is negatively regulated by Kelch-like ECH-associated protein 1 (KEAP1). Tumours from approximately 15% of patients with lung cancer harbour somatic mutations in KEAP1 that prevent effective NRF2 repression. Recently, two NRF2 mutation 'hot-spots' were identified in approximately 10% of patients with lung cancer, enabling the transcription factor to evade KEAP1-mediated repression. Somatic mutations in KEAP1 and NRF2 provide an insight into the molecular mechanisms by which NRF2 is regulated. Moreover, constitutive NRF2 activation might cause drug resistance in tumours, and an understanding of how the transcription factor is regulated indicates ways in which this could be overcome.