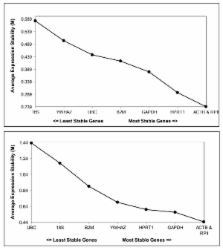 Given the epidemic proportions of obesity worldwide and the concurrent prevalence of metabolic syndrome, there is an urgent need for better understanding the underlying mechanisms of metabolic syndrome, in particular, the gene expression differences which may participate in obesity, insulin resistance and the associated series of chronic liver conditions. Real-time PCR (qRT-PCR) is the standard method for studying changes in relative gene expression in different tissues and experimental conditions. However, variations in amount of starting material, enzymatic efficiency and presence of inhibitors can lead to quantification errors. Hence the need for accurate data normalization is vital. Among several known strategies for data normalization, the use of reference genes as an internal control is the most common approach. Recent studies have shown that both obesity and presence of insulin resistance influence an expression of commonly used reference genes in omental fat. In this study we validated candidate reference genes suitable for qRT-PCR profiling experiments using visceral adipose samples from obese and lean individuals.

We recommend ACTB and RPII as stable reference genes most suitable for gene expression studies of human visceral adipose tissue. The use of these genes as a reference pair may further enhance the robustness of qRT-PCR in this model system.

Housekeeping genes as internal standards: use and limits.

O Thellin,  W Zorzi,  B Lakaye … (1999)
Quantitative studies are commonly realised in the biomedical research to compare RNA expression in different experimental or clinical conditions. These quantifications are performed through their comparison to the expression of the housekeeping gene transcripts like glyceraldehyde-3-phosphate dehydrogenase (G3PDH), albumin, actins, tubulins, cyclophilin, hypoxantine phsophoribosyltransferase (HRPT), L32. 28S, and 18S rRNAs are also used as internal standards. In this paper, it is recalled that the commonly used internal standards can quantitatively vary in response to various factors. Possible variations are illustrated using three experimental examples. Preferred types of internal standards are then proposed for each of these samples and thereafter the general procedure concerning the choice of an internal standard and the way to manage its uses are discussed.

Thomas D. Schmittgen,  Brian A Zakrajsek (2000)
The effects of serum on the expression of four commonly used housekeeping genes were examined in serum-stimulated fibroblasts in order to validate the internal control genes for a quantitative RT-PCR assay. NIH 3T3 fibroblasts transfected with an inducible chimeric gene were serum-starved for 24 h and then induced with 15% serum for 8 h. Serum did not alter the amount of total RNA that was expressed in the cells, however, the amount of mRNA significantly increased over time with serum-stimulation. Both messenger and total RNA from each of the time points were reverse transcribed under two different conditions; one in which the reactions were normalized to contain equal amounts of RNA and another series of reactions that were not normalized to RNA content. The resulting cDNA was amplified by real-time, quantitative PCR using gene-specific primers for beta-actin, beta-2 microglobulin, glyceraldehyde-3-phosphate dehydrogenase (GAPDH) and 18S ribosomal RNA. The expression of beta-actin and GAPDH increased up to nine- and three-fold, respectively, under all conditions of reverse transcription (P 0.05). The expression of beta-2 microglobulin increased up to two-fold when assayed from cDNA synthesized from non-normalized mRNA, but was unaffected by serum when the reverse transcriptions were normalized to mRNA. beta-2 Microglobulin expression was found to be directly proportional to the amount of mRNA that was present in non-normalized reverse transcription reactions. Thus, beta-2 microglobulin and 18S rRNA are suitable internal control genes in quantitative serum-stimulation studies, while beta-actin and GAPDH are not. The internal control gene needs to be properly validated when designing quantitative gene expression studies.