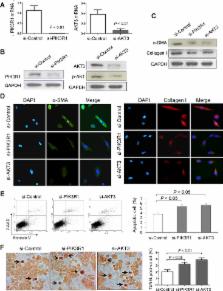 microRNA-29b (miR-29b) is known to be associated with TGF-β-mediated fibrosis, but the mechanistic action of miR-29b in liver fibrosis remains unclear and is warranted for investigation. We found that miR-29b was significantly downregulated in human and mice fibrotic liver tissues and in primary activated HSCs. miR-29b downregulation was directly mediated by Smad3 through binding to the promoter of miR-29b in hepatic stellate cell (HSC) line LX1, whilst miR-29b could in turn suppress Smad3 expression. miR-29b transduction in the liver of mice prevented CCl 4 induced-fibrogenesis, concomitant with decreased expression of α-SMA, collagen I and TIMP-1. Ectopic expression of miR-29b in activated HSCs (LX-1, HSC-T6) inhibited cell viability and colony formation, and caused cell cycle arrest in G1 phase by downregulating cyclin D1 and p21 cip1. Further, miR-29b induced apoptosis in HSCs mediated by caspase-9 and PARP. miR-29b inhibited its downstream effectors of PIK3R1 and AKT3 through direct targeting their 3′UTR regions. Moreover, knockdown of PIK3R1 or AKT3 suppressed α-SMA and collagen I and induced apoptosis in both HSCs and in mice. In conclusion, miR-29b prevents liver fibrogenesis by inhibiting HSC activation and inducing HSC apoptosis through inhibiting PI3K/AKT pathway. These results provide novel mechanistic insights for the anti-fibrotic effect of miR-29b.

X Meng,  Cheuk-Man Yu,  Joseph Sung … (2011)
TGF-β/Smad3 signaling promotes fibrosis, but the development of therapeutic interventions involving this pathway will require the identification and ultimate targeting of downstream fibrosis-specific genes. In this study, using a microRNA microarray and real-time PCR, wild-type mice had reduced expression of miR-29 along with the development of progressive renal fibrosis in obstructive nephropathy. In contrast, Smad3 knockout mice had increased expression of miR-29 along with the absence of renal fibrosis in the same model of obstruction. In cultured fibroblasts and tubular epithelial cells, Smad3 mediated TGF-β(1)-induced downregulation of miR-29 by binding to the promoter of miR-29. Furthermore, miR-29 acted as a downstream inhibitor and therapeutic microRNA for TGF-β/Smad3-mediated fibrosis. In vitro, overexpression of miR-29b inhibited, but knockdown of miR-29 enhanced, TGF-β(1)-induced expression of collagens I and III by renal tubular cells. Ultrasound-mediated gene delivery of miR-29b either before or after established obstructive nephropathy blocked progressive renal fibrosis. In conclusion, miR-29 is a downstream inhibitor of TGF-β/Smad3-mediated fibrosis and may have therapeutic potential for diseases involving fibrosis.

miR-29 is a major regulator of genes associated with pulmonary fibrosis.

Fengzhi Shao,  Sandra Cardoso,  Frédéric Little … (2011)
MicroRNAs (miRNA) are small regulatory RNAs that control gene expression by translational suppression and destabilization of target mRNAs. There is increasing evidence that miRNAs regulate genes associated with fibrosis in organs, such as the heart, kidney, liver, and the lung. In a large-scale screening for miRNAs potentially involved in bleomycin-induced fibrosis, we found expression of miR-29 family members significantly reduced in fibrotic lungs. Analysis of normal lungs showed the presence of miR-29 in subsets of interstitial cells of the alveolar wall, pleura, and at the entrance of the alveolar duct, known sites of pulmonary fibrosis. miR-29 levels inversely correlated with the expression levels of profibrotic target genes and the severity of the fibrosis. To study the impact of miR-29 down-regulation in the lung interstitium, we characterized gene expression profiles of human fetal lung fibroblast IMR-90 cells in which endogenous miR-29 was knocked down. This confirmed the derepression of reported miR-29 targets, including several collagens, but also revealed up-regulation of a large number of previously unrecognized extracellular matrix-associated and remodeling genes. Moreover, we found that miR-29 is suppressed by transforming growth factor (TGF)-β1 in these cells, and that many fibrosis-associated genes up-regulated by TGF-β1 are derepressed by miR-29 knockdown. Interestingly, a comparison of TGF-β1 and miR-29 targets revealed that miR-29 controls an additional subset of fibrosis-related genes, including laminins and integrins, independent of TGF-β1. Together, these strongly suggest a role of miR-29 in the pathogenesis of pulmonary fibrosis. miR-29 may be a potential new therapeutic target for this disease.