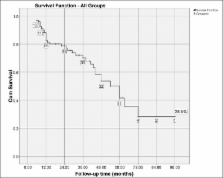 To evaluate the results and extrusion rates of the Ahmed glaucoma valve (AGV) implantation through a needle-generated scleral tunnel, without a tube-covering patch, in children.

A retrospective review of the charts of 106 Mexican children implanted with 128 AGVs operated between 1994 and 2002, with the needle track technique, at our institution, with at least six months follow up was done. Main outcome measures were intraocular pressure (IOP) control, tube extrusions or exposure and other complications.

Kaplan-Meier analysis demonstrated a 96.9% survival rate at six months, 82.4% at one year, 78.7% at two years, 70% at three years and 41.6% at four years. Total success at the last follow-up (IOP between 6 and 21 mm Hg without medications) was achieved in 30 eyes (23.5%), 58 eyes (45.3%) had qualified success (only topical hypotensive drugs) and 40 eyes (31.3%) were failures. The mean pre- and post-operative IOP at the last follow up was 28.4 mmHg (SD 9.3) and 14.5 mmHg (SD 6.3), respectively. No tube extrusions or exposures were observed. Tube-related complications included five retractions, a lens touch and a transitory endothelial touch. The risk of failure increased if the eye had any complication or previous glaucoma surgeries.

Medium-term IOP control in Mexican children with glaucoma can be achieved with AGV implantation using a needle-generated tunnel, without constructing a scleral flap or using a patch to cover the tube. There were no tube extrusions, nor any tube exposures with this technique.

A clinical study of the Ahmed glaucoma valve implant in advanced glaucoma.

R Monshizadeh,  R Ayyala,  William Layden … (1998)
To assess clinical outcomes and establish the incidence and management of a hypertensive phase (HP) (defined as intraocular pressure [IOP] > 21 mmHg in the first 6 postoperative months) in patients with Ahmed glaucoma valve implant. Retrospective noncomparative case series. A total of 85 patients were included in the current study, including consecutive patients who had intractable glaucoma and underwent Ahmed valve implant insertion at the University Glaucoma Center, Tampa, Florida (DWR and WEL) and the Massachusetts Eye and Ear Infirmary (PAN) between January 1993 and June 1997. Only patients with a minimum of 6 months' follow-up were included. Ahmed glaucoma valve implant insertion to control intractable glaucoma was performed. Success was defined as IOP less than 22 mmHg and greater than 4 mmHg on the last two visits, a decrease of no more than two lines in the visual acuity and no additional surgical interventions to control IOP. The cumulative probability of success at 12 months was 77%. A total of 26 patients (30.6%) failed during the study period, and 70 patients (82%) exhibited HP. Hypertensive phase peaked at 1 month after the operation and stabilized at 6 months. There were 34 patients (48%) with HP who were controlled with additional medications: 14 (20%) with needling and 5-fluorouracil injections and 20 (28%) who needed secondary surgical intervention. There were 8 patients (9.4%) who exhibited hypotony (< 5 mmHg) on postoperative day 1 and 3 (3.5%) at 3 months. Visual acuity returned to baseline between 3 and 6 months after the operation. The major complications associated with the valve were hyphema in 14 cases (16.5%), suprachoroidal hemorrhage in 4 cases (4.7%), end-plate exposure in 10 cases (11.7%), tube exposure in 6 cases (7%), tube block in 4 cases (4.7%), loss of vision in 5 cases (5.8%), and corneal graft failure in 4 (30%) of 13 cases with clear grafts. The overall success rate is comparable to that of prior studies using different implants. The majority of the patients exhibit an HP that peaks at 1 month, with gradual stabilization over 6 months. One third of the patients needed secondary surgical intervention to control the HP. The incidence of postoperative hypotony and flat or shallow anterior chambers is very low after Ahmed glaucoma valve insertion.

Laura Coleman,  M Moster,  S Siegner … (1998)
We studied the intermediate-term clinical experience with the Ahmed Glaucoma Valve implant (New World Medical, Inc, Rancho Cucamonga, California). In this multicenter, retrospective case series, we studied 159 eyes (144 patients) treated with the Ahmed Glaucoma Valve with a mean +/- SEM (standard error of mean) follow-up of 13.4 +/- 0.7 months (range, 4 to 44 months). The mean +/- SEM age was 60.9 +/- 1.9 years (range, 0.1 to 103 years). Surgical success was defined as intraocular pressure less than 22 mm Hg and greater than 5 mm Hg without additional glaucoma surgery and without loss of light perception. Postoperative use of antiglaucoma medications was not a criterion for success or failure. The definition of hypotony was intraocular pressure of 5 mm Hg or less in two consecutive visits. Intraocular pressure was reduced from a mean of 32.7 +/- 0.8 mm Hg before surgery to 15.9 +/- 0.6 mm Hg (P < .0001) at the most recent follow-up after surgery. The number of antiglaucoma medications was decreased from 2.7 +/- 0.1 before surgery to 1.1 +/- 0.1 after surgery (P < .0001). The cumulative probability of success was 87% at 1 year and 75% at 2 years after surgery (Kaplan-Meier life-table analysis). Postoperatively, 24 (15%) of 159 eyes had intraocular pressure greater than or equal to 22 mm Hg. The visual acuity was improved or within one Snellen line in 131 eyes (82%). Complications occurred in 75 eyes (47%), the majority of which did not affect surgical outcome. The most common complication was obstruction of the tube, which was observed in 17 eyes (11%). Transient postoperative hypotony was found in 13 eyes (8%). The Ahmed Glaucoma Valve implant is effective in lowering intraocular pressure, and postoperative hypotony is not commonly associated with this implant.

Follow-up of the original cohort with the Ahmed glaucoma valve implant.