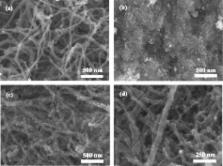 Cobalt oxide (Co 3O 4) was homogeneously coated on multiwalled carbon nanotube through a simple chemical deposition method and employed in supercapacitor electrodes. SEM image indicated the uniform distribution of Co 3O 4 nanoparticles on the surface of the multiwalled carbon nanotube. A maximum specific capacitance of 273 Fg −1 was obtained at the charge–discharge current density of 0.5 Ag −1. After 500 cycles of continuous charge–discharge process, about 88% of the initial capacity could be retained.

Design and tailoring of the nanotubular arrayed architecture of hydrous RuO2 for next generation supercapacitors.

Chi-Tan Hu,  Chin-Kuo Chang,  Che-Ming Lin … (2006)
By use of the membrane-templated synthesis route, hydrous RuO2 (RuO2.xH2O) nanotubular arrayed electrodes were successfully synthesized by means of the anodic deposition technique. The desired three-dimensional mesoporous architecture of RuO2.xH2O nanotubular arrayed electrodes with annealing in air at 200 degrees C for 2 h simultaneously maintained the facility of electrolyte penetration, the ease of proton exchange/diffusion, and the metallic conductivity of crystalline RuO2, exhibiting unexpectedly ultrahigh power characteristics with its frequency "knee" reaching ca. 4.0-7.8 kHz, 20-40 times better than that of RuO2 single crystalline, arrayed nanorods. The specific power and specific energy of annealed RuO2.xH2O nanotubes measured at 0.8 V and 4 kHz is equal to 4320 kW kg-1 and 7.5 W h kg-1, respectively, demonstrating the characteristics of next generation supercapacitors.

Liwei Su,  Yu-Hong Jing,  Zhen-Zhen Zhou (2011)
Nanomaterials have some disadvantages in application as Li ion battery materials, such as low density, poor electronic conductivity and high risk of surface side reactions. In recent years, materials with core-shell nanostructures, which was initially a common concept in semiconductors, have been introduced to the field of Li ion batteries in order to overcome the disadvantages of nanomaterials, and increase their general performances in Li ion batteries. Many efforts have been made to exploit core-shell Li ion battery materials, including cathode materials, such as lithium transition metal oxides with varied core and shell compositions, and lithium transition metal phosphates with carbon shells; and anode materials, such as metals, alloys, Si and transition metal oxides with carbon shells. More recently, graphene has also been proposed as a shell material. All these core-shell nanostructured materials presented enhanced electrochemical capacity and cyclic stability. In this review, we summarize the preparation, electrochemical performances, and structural stability of core-shell nanostructured materials for lithium ion batteries, and we also discuss the problems and prospects of this kind of materials.

This is an Open Access article distributed under the terms of the Creative Commons Attribution License ( http://creativecommons.org/licenses/by/4.0), which permits unrestricted use, distribution, and reproduction in any medium, provided the original work is properly credited.