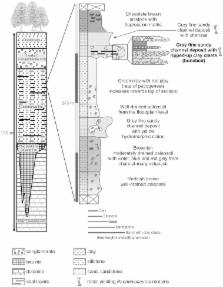 W Ding,  David S. Vicario,  H Balchowsky … (2000)
The four species of "river dolphins" are associated with six separate great river systems on three subcontinents and have been grouped for more than a century into a single taxon based on their similar appearance. However, several morphologists recently questioned the monophyly of that group. By using phylogenetic analyses of nucleotide sequences from three mitochondrial and two nuclear genes, we demonstrate with statistical significance that extant river dolphins are not monophyletic and suggest that they are relict species whose adaptation to riverine habitats incidentally insured their survival against major environmental changes in the marine ecosystem or the emergence of Delphinidae.

Phylogeny, Histology and Inferred Body Size Evolution in a New Rhabdodontid Dinosaur from the Late Cretaceous of Hungary

Attila Ősi,  Edina Prondvai,  Richard Butler … (2012)
Background Rhabdodontid ornithopod dinosaurs are characteristic elements of Late Cretaceous European vertebrate faunas and were previously collected from lower Campanian to Maastrichtian continental deposits. Phylogenetic analyses have placed rhabdodontids among basal ornithopods as the sister taxon to the clade consisting of Tenontosaurus, Dryosaurus, Camptosaurus, and Iguanodon. Recent studies considered Zalmoxes, the best known representative of the clade, to be significantly smaller than closely related ornithopods such as Tenontosaurus, Camptosaurus, or Rhabdodon, and concluded that it was probably an island dwarf that inhabited the Maastrichtian Haţeg Island. Methodology/Principal Findings Rhabdodontid remains from the Santonian of western Hungary provide evidence for a new, small-bodied form, which we assign to Mochlodon vorosi n. sp. The new species is most similar to the early Campanian M. suessi from Austria, and the close affinities of the two species is further supported by the results of a global phylogenetic analysis of ornithischian dinosaurs. Bone histological studies of representatives of all rhabdodontids indicate a similar adult body length of 1.6–1.8 m in the Hungarian and Austrian species, 2.4–2.5 m in the subadults of both Zalmoxes robustus and Z. shqiperorum and a much larger, 5–6 m adult body length in Rhabdodon. Phylogenetic mapping of femoral lengths onto the results of the phylogenetic analysis suggests a femoral length of around 340 mm as the ancestral state for Rhabdodontidae, close to the adult femoral lengths known for Zalmoxes (320–333 mm). Conclusions/Significance Our analysis of body size evolution does not support the hypothesis of autapomorhic nanism for Zalmoxes. However, Rhabdodon is reconstructed as having undergone autapomorphic giantism and the reconstructed small femoral length (245 mm) of Mochlodon is consistent with a reduction in size relative to the ancestral rhabdodontid condition. Our results imply a pre-Santonian divergence between western and eastern rhabdodontid lineages within the western Tethyan archipelago.

A Late Cretaceous ceratopsian dinosaur from Europe with Asian affinities.

Robert R. Butler,  David Weishampel,  Attila Ősi (2010)
Ceratopsians (horned dinosaurs) represent a highly diverse and abundant radiation of non-avian dinosaurs known primarily from the Cretaceous period (65-145 million years ago). This radiation has been considered to be geographically limited to Asia and western North America, with only controversial remains reported from other continents. Here we describe new ceratopsian cranial material from the Late Cretaceous of Iharkút, Hungary, from a coronosaurian ceratopsian, Ajkaceratops kozmai. Ajkaceratops is most similar to 'bagaceratopsids' such as Bagaceratops and Magnirostris, previously known only from Late Cretaceous east Asia. The new material unambiguously demonstrates that ceratopsians occupied Late Cretaceous Europe and, when considered with the recent discovery of possible leptoceratopsid teeth from Sweden, indicates that the clade may have reached Europe on at least two independent occasions. European Late Cretaceous dinosaur faunas have been characterized as consisting of a mix of endemic 'relictual' taxa and 'Gondwanan' taxa, with typical Asian and North American groups largely absent. Ajkaceratops demonstrates that this prevailing biogeographical hypothesis is overly simplified and requires reassessment. Iharkút was part of the western Tethyan archipelago, a tectonically complex series of island chains between Africa and Europe, and the occurrence of a coronosaurian ceratopsian in this locality may represent an early Late Cretaceous 'island-hopping' dispersal across the Tethys Ocean.

MWC was supported by an NSERC Discovery Grant (#238458-01) and a University of Alberta, Chairs Research Allowance. Fieldwork and the work of LM and AŐ were supported by the OTKA T-39045, PD-73021, NF-84193 grants; the MTA-ELTE Lendület (Dinosaur Research Group, grant n.95102); the National Geographic Society; the Jurassic Foundation, and the Hantken Foundation. The funders had no role in study design, data collection and analysis, decision to publish, or preparation of the manuscript.