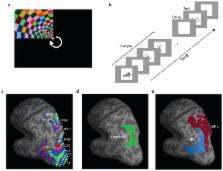 Recent studies have provided conflicting accounts regarding where in the human brain visual short-term memory (VSTM) content is stored, with strong univariate fMRI responses reported in superior intraparietal sulcus (IPS) but robust multivariate decoding reported in occipital cortex. Given the continuous influx of information in everyday vision, VSTM storage under distraction is often required. We found that neither distractor presence nor predictability during the memory delay affected behavioral performance. Similarly, superior IPS exhibited consistent decoding of VSTM content across all distractor manipulations and had multivariate responses that closely tracked behavioral VSTM performance. However, occipital decoding of VSTM content was significantly modulated by distractor presence and predictability. Furthermore, we found no effect of target-distractor similarity on VSTM behavioral performance, further challenging the role of sensory regions in VSTM storage. Overall, consistent with previous univariate findings, these results show that superior IPS, not occipital cortex, plays a central role in VSTM storage.

The magical number 4 in short-term memory: a reconsideration of mental storage capacity.

M N Cowan (2001)
Miller (1956) summarized evidence that people can remember about seven chunks in short-term memory (STM) tasks. However, that number was meant more as a rough estimate and a rhetorical device than as a real capacity limit. Others have since suggested that there is a more precise capacity limit, but that it is only three to five chunks. The present target article brings together a wide variety of data on capacity limits suggesting that the smaller capacity limit is real. Capacity limits will be useful in analyses of information processing only if the boundary conditions for observing them can be carefully described. Four basic conditions in which chunks can be identified and capacity limits can accordingly be observed are: (1) when information overload limits chunks to individual stimulus items, (2) when other steps are taken specifically to block the recording of stimulus items into larger chunks, (3) in performance discontinuities caused by the capacity limit, and (4) in various indirect effects of the capacity limit. Under these conditions, rehearsal and long-term memory cannot be used to combine stimulus items into chunks of an unknown size; nor can storage mechanisms that are not capacity-limited, such as sensory memory, allow the capacity-limited storage mechanism to be refilled during recall. A single, central capacity limit averaging about four chunks is implicated along with other, noncapacity-limited sources. The pure STM capacity limit expressed in chunks is distinguished from compound STM limits obtained when the number of separately held chunks is unclear. Reasons why pure capacity estimates fall within a narrow range are discussed and a capacity limit for the focus of attention is proposed.

B Fischl,  A. Liu,  A.M. Dale (2001)
Highly accurate surface models of the cerebral cortex are becoming increasingly important as tools in the investigation of the functional organization of the human brain. The construction of such models is difficult using current neuroimaging technology due to the high degree of cortical folding. Even single voxel misclassifications can result in erroneous connections being created between adjacent banks of a sulcus, resulting in a topologically inaccurate model. These topological defects cause the cortical model to no longer be homeomorphic to a sheet, preventing the accurate inflation, flattening, or spherical morphing of the reconstructed cortex. Surface deformation techniques can guarantee the topological correctness of a model, but are time-consuming and may result in geometrically inaccurate models. In order to address this need we have developed a technique for taking a model of the cortex, detecting and fixing the topological defects while leaving that majority of the model intact, resulting in a surface that is both geometrically accurate and topologically correct.

Nikolaus Kriegeskorte,  Marieke Mur,  Douglas Ruff … (2009)
Inferior temporal (IT) object representations have been intensively studied in monkeys and humans, but representations of the same particular objects have never been compared between the species. Moreover, IT's role in categorization is not well understood. Here, we presented monkeys and humans with the same images of real-world objects and measured the IT response pattern elicited by each image. In order to relate the representations between the species and to computational models, we compare response-pattern dissimilarity matrices. IT response patterns form category clusters, which match between man and monkey. The clusters correspond to animate and inanimate objects; within the animate objects, faces and bodies form subclusters. Within each category, IT distinguishes individual exemplars, and the within-category exemplar similarities also match between the species. Our findings suggest that primate IT across species may host a common code, which combines a categorical and a continuous representation of objects.