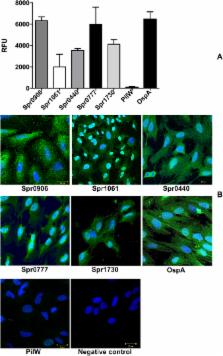 The mechanisms by which Streptococcus pneumoniae penetrates the blood-brain barrier (BBB), reach the CNS and causes meningitis are not fully understood. Adhesion of bacterial cells on the brain microvascular endothelial cells (BMECs), mediated through protein-protein interactions, is one of the crucial steps in translocation of bacteria across BBB. In this work, we proposed a systematic workflow for identification of cell wall associated ligands of pneumococcus that might adhere to the human BMECs. The proteome of S. pneumoniae was biotinylated and incubated with BMECs. Interacting proteins were recovered by affinity purification and identified by data independent acquisition (DIA). A total of 44 proteins were identified from which 22 were found to be surface-exposed. Based on the subcellular location, ontology, protein interactive analysis and literature review, five ligands (adhesion lipoprotein, endo-β-N-acetylglucosaminidase, PhtA and two hypothetical proteins, Spr0777 and Spr1730) were selected to validate experimentally (ELISA and immunocytochemistry) the ligand-BMECs interaction. In this study, we proposed a high-throughput approach to generate a dataset of plausible bacterial ligands followed by systematic bioinformatics pipeline to categorize the protein candidates for experimental validation. The approach proposed here could contribute in the fast and reliable screening of ligands that interact with host cells.

Søren Brunak,  Henrik Nielsen,  Anders Krogh … (2003)
A method to predict lipoprotein signal peptides in Gram-negative Eubacteria, LipoP, has been developed. The hidden Markov model (HMM) was able to distinguish between lipoproteins (SPaseII-cleaved proteins), SPaseI-cleaved proteins, cytoplasmic proteins, and transmembrane proteins. This predictor was able to predict 96.8% of the lipoproteins correctly with only 0.3% false positives in a set of SPaseI-cleaved, cytoplasmic, and transmembrane proteins. The results obtained were significantly better than those of previously developed methods. Even though Gram-positive lipoprotein signal peptides differ from Gram-negatives, the HMM was able to identify 92.9% of the lipoproteins included in a Gram-positive test set. A genome search was carried out for 12 Gram-negative genomes and one Gram-positive genome. The results for Escherichia coli K12 were compared with new experimental data, and the predictions by the HMM agree well with the experimentally verified lipoproteins. A neural network-based predictor was developed for comparison, and it gave very similar results. LipoP is available as a Web server at www.cbs.dtu.dk/services/LipoP/.

alpha-Enolase of Streptococcus pneumoniae is a plasmin(ogen)-binding protein displayed on the bacterial cell surface.

S Hammerschmidt,  G. Singh Chhatwal,  M Rohde … (2001)
Binding of human plasminogen to Streptococcus pneumoniae and its subsequent activation promotes penetration of bacteria through reconstituted basement membranes. In this study, we have characterized a novel pneumococcal surface protein with a molecular mass of 47 kDa, designated Eno, which specifically binds human plasmin(ogen), exhibits alpha-enolase activity and is necessary for viability. Using enzyme assays, we have confirmed the alpha-enolase activity of both pneumococcal surface-displayed Eno and purified recombinant Eno protein. Immunoelectron microscopy indicated the presence of Eno in the cytoplasm as well as on the surface of encapsulated and unencapsulated pneumococci. Plasminogen-binding activity was demonstrated with whole pneumococcal cells and purified Eno protein. Binding of activated plasminogen was also shown for Eno; however, the affinity for plasmin is significantly reduced compared with plasminogen. Results from competitive inhibition assays indicate that binding is mediated through the lysine binding sites in plasmin(ogen). Carboxypeptidase B treatment and amino acid substitutions of the C-terminal lysyl residues of Eno indicated that the C-terminal lysine is pivotal for plasmin(ogen)-binding activity. Eno is ubiquitously distributed among pneumococcal serotypes, and binding experiments suggested the reassociation of secreted Eno to the bacterial cell surface. The reassociation was also confirmed by immunoelectron microscopy. The results suggest a mechanism of plasminogen activation for human pathogens that might contribute to their virulence potential in invasive infectious processes.

Characterization and identification of vaccine candidate proteins through analysis of the group A Streptococcus surface proteome.

Alessia Covre,  J Ortega,  G Ferrari … (2006)
We describe a proteomic approach for identifying bacterial surface-exposed proteins quickly and reliably for their use as vaccine candidates. Whole cells are treated with proteases to selectively digest protruding proteins that are subsequently identified by mass spectrometry analysis of the released peptides. When applied to the sequenced M1_SF370 group A Streptococcus strain, 68 PSORT-predicted surface-associated proteins were identified, including most of the protective antigens described in the literature. The number of surface-exposed proteins varied from strain to strain, most likely as a consequence of different capsule content. The surface-exposed proteins of the highly virulent M23_DSM2071 strain included 17 proteins, 15 in common with M1_SF370. When 14 of the 17 proteins were expressed in E. coli and tested in the mouse for their capacity to confer protection against a lethal dose of M23_DSM2071, one new protective antigen (Spy0416) was identified. This strategy overcomes the difficulties so far encountered in surface protein characterization and has great potential in vaccine discovery.