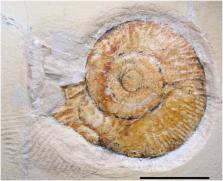 Trackways and tracemakers preserved together in the fossil record are rare. However, the co-occurrence of a drag mark, together with the dead animal that produced it, is exceptional. Here, we describe an 8.5 m long ammonite drag mark complete with the preserved ammonite shell ( Subplanites rueppellianus) at its end. Previously recorded examples preserve ammonites with drag marks of < 1 m. The specimen was recovered from a quarry near Solnhofen, southern Germany. The drag mark consists of continuous parallel ridges and furrows produced by the ribs of the ammonite shell as it drifted just above the sediment surface, and does not reflect behaviour of the living animal.

David J. Varricchio,  Anthony J Martin,  Yoshihiro Katsura (2007)
A fossil discovery in the mid-Cretaceous Blackleaf Formation of southwest Montana, USA, has yielded the first trace and body fossil evidence of burrowing behaviour in a dinosaur. Skeletal remains of an adult and two juveniles of Oryctodromeus cubicularis gen. et sp. nov. a new species of hypsilophodont-grade dinosaur, were found in the expanded distal chamber of a sediment-filled burrow. Correspondence between burrow and adult dimensions supports Oryctodromeus as the burrow maker. Additionally, Oryctodromeus exhibits features of the snout, shoulder girdle and pelvis consistent with digging habits while retaining cursorial hindlimb proportions. Association of adult and young within a terminal chamber provides definitive evidence of extensive parental care in the Dinosauria. As with modern vertebrate cursors that dig, burrowing in Oryctodromeus may have been an important adaptation for the rearing of young. Burrowing also represents a mechanism by which small dinosaurs may have exploited the extreme environments of polar latitudes, deserts and high mountain areas. The ability among dinosaurs to find or make shelter may contradict some scenarios of the Cretaceous-Paleogene impact event. Burrowing habits expand the known range of nonavian dinosaur behaviours and suggest that the cursorial ancestry of dinosaurs did not fully preclude the evolution of different functional regimes, such as fossoriality.

Vincent Fernandez,  Fernando Abdala,  Kristian Carlson … (2013)
Fossorialism is a beneficial adaptation for brooding, predator avoidance and protection from extreme climate. The abundance of fossilised burrow casts from the Early Triassic of southern Africa is viewed as a behavioural response by many tetrapods to the harsh conditions following the Permo-Triassic mass-extinction event. However, scarcity of vertebrate remains associated with these burrows leaves many ecological questions unanswered. Synchrotron scanning of a lithified burrow cast from the Early Triassic of the Karoo unveiled a unique mixed-species association: an injured temnospondyl amphibian (Broomistega) that sheltered in a burrow occupied by an aestivating therapsid (Thrinaxodon). The discovery of this rare rhinesuchid represents the first occurrence in the fossil record of a temnospondyl in a burrow. The amphibian skeleton shows signs of a crushing trauma with partially healed fractures on several consecutive ribs. The presence of a relatively large intruder in what is interpreted to be a Thrinaxodon burrow implies that the therapsid tolerated the amphibian’s presence. Among possible explanations for such unlikely cohabitation, Thrinaxodon aestivation is most plausible, an interpretation supported by the numerous Thrinaxodon specimens fossilised in curled-up postures. Recent advances in synchrotron imaging have enabled visualization of the contents of burrow casts, thus providing a novel tool to elucidate not only anatomy but also ecology and biology of ancient tetrapods.