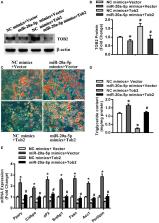 K Murakami,  S Satoh,  C Ishii … (1999)
Agonist-induced activation of peroxisome proliferator-activated receptor gamma (PPAR gamma) is known to cause adipocyte differentiation and insulin sensitivity. The biological role of PPAR gamma was investigated by gene targeting. Homozygous PPAR gamma-deficient embryos died at 10.5-11.5 dpc due to placental dysfunction. Quite unexpectedly, heterozygous PPAR gamma-deficient mice were protected from the development of insulin resistance due to adipocyte hypertrophy under a high-fat diet. These phenotypes were abrogated by PPAR gamma agonist treatment. Heterozygous PPAR gamma-deficient mice showed overexpression and hypersecretion of leptin despite the smaller size of adipocytes and decreased fat mass, which may explain these phenotypes at least in part. This study reveals a hitherto unpredicted role for PPAR gamma in high-fat diet-induced obesity due to adipocyte hypertrophy and insulin resistance, which requires both alleles of PPAR gamma.

S. Vienberg,  Constance Geiger,  S S Madsen … (2016)
Abstract MicroRNAs (miRNAs) have within the past decade emerged as key regulators of metabolic homoeostasis. Major tissues in intermediary metabolism important during development of the metabolic syndrome, such as β‐cells, liver, skeletal and heart muscle as well as adipose tissue, have all been shown to be affected by miRNAs. In the pancreatic β‐cell, a number of miRNAs are important in maintaining the balance between differentiation and proliferation (miR‐200 and miR‐29 families) and insulin exocytosis in the differentiated state is controlled by miR‐7, miR‐375 and miR‐335. MiR‐33a and MiR‐33b play crucial roles in cholesterol and lipid metabolism, whereas miR‐103 and miR‐107 regulates hepatic insulin sensitivity. In muscle tissue, a defined number of miRNAs (miR‐1, miR‐133, miR‐206) control myofibre type switch and induce myogenic differentiation programmes. Similarly, in adipose tissue, a defined number of miRNAs control white to brown adipocyte conversion or differentiation (miR‐365, miR‐133, miR‐455). The discovery of circulating miRNAs in exosomes emphasizes their importance as both endocrine signalling molecules and potentially disease markers. Their dysregulation in metabolic diseases, such as obesity, type 2 diabetes and atherosclerosis stresses their potential as therapeutic targets. This review emphasizes current ideas and controversies within miRNA research in metabolism.

Up-regulated expression of microRNA-143 in association with obesity in adipose tissue of mice fed high-fat diet.

Toru Kita,  Tomohide Takaya,  Takahiro Horie … (2008)
MicroRNAs (miRNAs) are short non-coding RNA that post-transcriptionally regulates gene expression. miR-143 has been proposed to play a role in the differentiation of adipocytes in culture. However, the mechanism regulating the expression of miR-143 in adult adipose tissue during the development of obesity in vivo is unknown. Here in, we showed that the expression of miR-143 in the mesenteric fat was up-regulated in mice fed a high-fat diet. Increased miR-143 expression was associated with an elevated body weight and mesenteric fat weight. Furthermore, miR-143 levels were closely correlated with expression levels of adipocyte differentiation markers such as PPARgamma and aP2 as well as plasma levels of leptin, one of the important adipocytokines involved in insulin resistance. These findings provide the first evidence for the up-regulated expression of miR-143 in the mesenteric fat of high-fat diet-induced obese mice, which might contribute to the regulated expression of adipocyte genes involved in the pathophysiology of obesity.