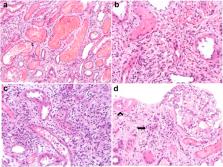 Warfarin-related nephropathy occurs in patients with and without chronic kidney disease and is associated with an increased mortality rate.

Sergey V Brodsky,  Tibor Nadasdy,  Brad H Rovin … (2011)
An acute increase in the international normalized ratio (INR; a comparison of prothrombin time to monitor the effects of warfarin) over 3 in patients with chronic kidney disease (CKD) is often associated with an unexplained acute increase in serum creatinine (SC) and an accelerated progression of CKD. Kidney biopsy in a subset of these patients showed obstruction of the renal tubule by red blood cell casts, and this appears to be the dominant mechanism of the acute kidney injury. We termed this warfarin-related nephropathy (WRN), and previously reported cases of WRN only in patients with CKD. We now assess whether this occurs in patients without CKD, its risk factors, and consequences. In 15,258 patients who initiated warfarin therapy during a 5-year period, 4006 had an INR over 3 and SC measured at the same time; however, the large data set precluded individual patient clinical assessment. A presumptive diagnosis of WRN was made if the SC increased by over 0.3 mg/dl within 1 week after the INR exceeded 3 with no record of hemorrhage. WRN occurred in 20.5% of the entire cohort, 33.0% of the CKD cohort, and 16.5% of the no-CKD cohort. Other risk factors included age, diabetes mellitus, hypertension, and cardiovascular disease. The 1-year mortality was 31.1% with compared with 18.9% without WRN, an increased risk of 65%. Thus, WRN may be a common complication of warfarin therapy in high-risk patients and CKD doubles this risk. The mechanisms of these risks are unclear.

G Molnar-Nadasdy,  Anjali Satoskar,  Alexander Brodsky … (2009)
Acute kidney injury (AKI) during warfarin therapy usually is hemodynamic secondary to massive blood loss. Here, we report pathological findings in kidney biopsy specimens from 9 patients with warfarin overdose, hematuria, and AKI. Kidney biopsy specimens from patients on warfarin therapy with AKI were identified in our database within a 5-year period. Each kidney biopsy specimen was evaluated by using semiquantitative morphometric techniques, and medical history was reviewed for conditions explaining AKI. Biopsy specimens with morphological findings of active glomerulonephritis and active inflammatory lesions were excluded from the study. Biopsy specimens from 9 patients were selected. At presentation with AKI, each patient had an abnormal international normalized ratio (mean 4.4 +/- 0.7 IU) and increased serum creatinine level (mean, 4.3 +/- 0.8 mg/dL). Morphologically, each biopsy specimen showed evidence of acute tubular injury and glomerular hemorrhage: red blood cells (RBCs) in Bowman space and numerous occlusive RBC casts in tubules. Each biopsy specimen showed chronic kidney injury. Six of 9 patients did not recover from AKI. These data suggest that warfarin therapy can result in AKI by causing glomerular hemorrhage and renal tubular obstruction by RBC casts. Our experience suggests that this may be a potentially serious complication of warfarin therapy, especially in older patients with underlying chronic kidney injury.

Sergey V Brodsky,  Michael David Collins,  Edward Park … (2010)
Background/Aims: We had previously reported that acute kidney injury (AKI) in warfarin-treated chronic kidney disease (CKD) patients may occur shortly after an acute increase in the International Normalization Ratio (INR) >3.0 with formation of occlusive red blood casts. Recovery from this warfarin-associated AKI is poor. Here we investigated whether excessive warfarin therapy could accelerate the progression of CKD. Methods: We analyzed serum creatinine (SC) and INR in 103 consecutive CKD patients on warfarin therapy in our Nephrology program from 2005 to the present. Results: Forty-nine patients experienced at least 1 episode of INR >3.0. Of these, 18 patients (37%, Group 1) developed an unexplained increase in SC ≧0.3 mg/dl coincident with INR >3.0 (mean SC increase 0.61 ± 0.44 mg/dl); 31 patients (63%, Group 2) showed stable SC (mean SC change 0.04 ± 0.19 mg/dl). Subsequent CKD progression was accelerated in Group 1, but not in Group 2. The 2 groups were not different with respect to demographics, comorbidities, blood pressure, or therapies. However, African Americans were overrepresented in Group 1 (p = 0.035). Conclusions: Overanticoagulation is associated with faster progression of CKD in a high percentage of patients. Our results indicate the need for prospective trials. Nevertheless, we suggest that our findings are sufficiently compelling at this point to justi- fy extra caution in warfarin-treated CKD patients to avoid overanticoagulation.