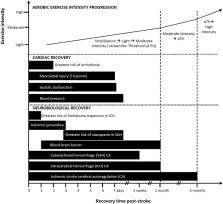 Knowledge gaps exist in how we implement aerobic exercise programs during the early phases post-stroke. Therefore, the objective of this review was to provide evidence-based guidelines for pre-participation screening, mobilization, and aerobic exercise training in the hyper-acute and acute phases post-stroke. In reviewing the literature to determine safe timelines of when to initiate exercise and mobilization we considered the following factors: arterial blood pressure dysregulation, cardiac complications, blood-brain barrier disruption, hemorrhagic stroke transformation, and ischemic penumbra viability. These stroke-related impairments could intensify with inappropriate mobilization/aerobic exercise, hence we deemed the integrity of cerebral autoregulation to be an essential physiological consideration to protect the brain when progressing exercise intensity. Pre-participation screening criteria are proposed and countermeasures to protect the brain from potentially adverse circulatory effects before, during, and following mobilization/exercise sessions are introduced. For example, prolonged periods of standing and static postures before and after mobilization/aerobic exercise may elicit blood pooling and/or trigger coagulation cascades and/or cerebral hypoperfusion. Countermeasures such as avoiding prolonged standing or incorporating periodic lower limb movement to activate the venous muscle pump could counteract blood pooling after an exercise session, minimize activation of the coagulation cascade, and mitigate potential cerebral hypoperfusion. We discuss patient safety in light of the complex nature of stroke presentations (i.e., type, severity, and etiology), medical history, comorbidities such as diabetes, cardiac manifestations, medications, and complications such as anemia and dehydration. The guidelines are easily incorporated into the care model, are low-risk, and use minimal resources. These and other strategies represent opportunities for improving the safety of the activity regimen offered to those in the early phases post-stroke. The timeline for initiating and progressing exercise/mobilization parameters are contingent on recovery stages both from neurobiological and cardiovascular perspectives, which to this point have not been specifically considered in practice. This review includes tailored exercise and mobilization prescription strategies and precautions that are not resource intensive and prioritize safety in stroke recovery.

Guidelines for the Management of Spontaneous Intracerebral Hemorrhage: A Guideline for Healthcare Professionals From the American Heart Association/American Stroke Association

J Claude Hemphill, Steven Greenberg, Craig Anderson … (2015)
The aim of this guideline is to present current and comprehensive recommendations for the diagnosis and treatment of spontaneous intracerebral hemorrhage.

Lee Ferris, James Williams, Chwan-Li Shen (2007)
Brain-derived neurotrophic factor (BDNF) is one of a family of neurotrophic factors that participates in neuronal transmission, modulation and plasticity. Previous studies using animals have demonstrated that acute and chronic exercise leads to increases in BDNF in various brain regions. To determine the effects of acute exercise on serum BDNF levels in humans, and to determine the relationship between exercise intensity and BDNF responses. Additionally, the relationship between changes in BDNF and cognitive function was examined. Fifteen subjects (25.4 +/- 1.01 yr; 11 male, 4 female) performed a graded exercise test (GXT) for the determination of VO2max and ventilatory threshold (VTh) on a cycle ergometer. On separate days, two subsequent 30-min endurance rides were performed at 20% below the VTh (VTh - 20) and at 10% above the VTh (VTh + 10). Serum BDNF and cognitive function were determined before and after the GXT and endurance rides with an enzyme-linked immunosorbent assay (ELISA) and the Stroop tests, respectively. The mean VO2max was 2805.8 +/- 164.3 mL x min(-1) (104.2 +/- 7.0% pred). BDNF values (pg x mL(-1)) increased from baseline (P<0.05) after exercise at the VTh + 10 (13%) and the GXT (30%). There was no significant change in BDNF from baseline after the VTh - 20. Changes in BDNF did not correlate with VO2max during the GXT, but they did correlate with changes in lactate (r=0.57; P<0.05). Cognitive function scores improved after all exercise conditions, but they did not correlate with BDNF changes. BDNF levels in humans are significantly elevated in response to exercise, and the magnitude of increase is exercise intensity dependent. Given that BDNF can transit the blood-brain barrier in both directions, the intensity-dependent findings may aid in designing exercise prescriptions for maintaining or improving neurological health.

This article was submitted to Neurorehabilitation, a section of the journal Frontiers in Neurology