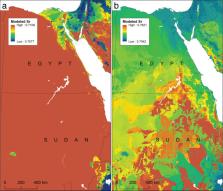 The Red Sea was witness to important events during human history, including the first long steps in a trade network (the spice route) that would drive maritime technology and shape geopolitical fortunes for thousands of years. Punt was a pivotal early node in the rise of this enterprise, serving as an important emporium for luxury goods, including sacred baboons ( Papio hamadryas), but its location is disputed. Here, we use geospatial variation in the oxygen and strontium isotope ratios of 155 baboons from 77 locations to estimate the geoprovenance of mummified baboons recovered from ancient Egyptian temples and tombs. Five Ptolemaic specimens of P. anubis (404–40 BC) showed evidence of long-term residency in Egypt prior to mummification, consistent with a captive breeding program. Two New Kingdom specimens of P. hamadryas were sourced to a region that encompasses much of present-day Ethiopia, Eritrea, and Djibouti, and portions of Somalia and Yemen. This result is a testament to the tremendous reach of Egyptian seafaring during the 2nd millennium BC. It also corroborates the balance of scholarly conjecture on the location of Punt.

Strontium is a chemical element that can act as a geographic fingerprint: its composition differs between locations, and as it enters the food chain, it can help to retrace the life history of extant or past animals. In particular, strontium in teeth – which stop to develop early – can reveal where an individual was born; strontium in bone and hair, on the other hand, can show where it lived just before death. Together, these analyses may hold the key to archaeological mysteries, such as the location of a long-lost kingdom revered by ancient Egyptians.

For hundreds of years, the Land of Punt was one of Egypt’s strongest trading partners, and a place from which to import premium incense and prized monkeys. Travellers could reach Punt by venturing south and east of Egypt, suggesting that the kingdom occupied the southern Red Sea region. Yet its exact location is still highly debated.

To investigate, Dominy et al. examined the mummies of baboons present in ancient Egyptian tombs, and compared the strontium compositions of the bones, hair and teeth of these remains with the ones found in baboons living in various regions across Africa. This shed a light on the origins of the ancient baboons: while some were probably raised in captivity in Egypt, others were born in modern Ethiopia, Eritrea, Djibouti, Somalia and Yemen – areas already highlighted as potential locations for the Land of Punt.

The work by Dominy et al. helps to better understand the ancient trade routes that shaped geopolitical fortunes for millennia. It also highlights the need for further archaeological research in Eritrea and Somalia, two areas which are currently understudied.

Dietmar Zinner,  Jenny Wertheimer,  Rasmus Liedigk … (2013)
Baboons (genus Papio) are an interesting phylogeographical primate model for the evolution of savanna species during the Pleistocene. Earlier studies, based on partial mitochondrial sequence information, revealed seven major haplogroups indicating multiple para- and polyphylies among the six baboon species. The most basal splits among baboon lineages remained unresolved and the credibility intervals for divergence time estimates were rather large. Assuming that genetic variation within the two studied mitochondrial loci so far was insufficient to infer the apparently rapid early radiation of baboons we used complete mitochondrial sequence information of ten specimens, representing all major baboon lineages, to reconstruct a baboon phylogeny and to re-estimate divergence times. Our data confirmed the earlier tree topology including the para- and polyphyletic relationships of most baboon species; divergence time estimates are slightly younger and credibility intervals narrowed substantially, thus making the estimates more precise. However, the most basal relationships could not be resolved and it remains open whether (1) the most southern population of baboons diverged first or (2) a major split occurred between southern and northern clades. Our study shows that complete mitochondrial genome sequences are more effective to reconstruct robust phylogenies and to narrow down estimated divergence time intervals than only short portions of the mitochondrial genome, although there are also limitations in resolving phylogenetic relationships. Am J Phys Anthropol, 2013. © 2012 Wiley Periodicals, Inc.