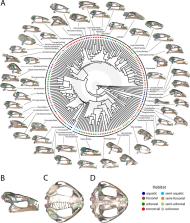 Habitat is one of the most important factors shaping organismal morphology, but it may vary across life history stages. Ontogenetic shifts in ecology may introduce antagonistic selection that constrains adult phenotype, particularly with ecologically distinct developmental phases such as the free-living, feeding larval stage of many frogs (Lissamphibia: Anura). We test the relative influences of developmental and ecological factors on the diversification of adult skull morphology with a detailed analysis of 15 individual cranial regions across 173 anuran species, representing every extant family. Skull size, adult microhabitat, larval feeding, and ossification timing are all significant factors shaping aspects of cranial evolution in frogs, with late-ossifying elements showing the greatest disparity and fastest evolutionary rates. Size and microhabitat show the strongest effects on cranial shape, and we identify a “large size-wide skull” pattern of anuran, and possibly amphibian, evolutionary allometry. Fossorial and aquatic microhabitats occupy distinct regions of morphospace and display fast evolution and high disparity. Taxa with and without feeding larvae do not notably differ in cranial morphology. However, loss of an actively feeding larval stage is associated with higher evolutionary rates and disparity, suggesting that functional pressures experienced earlier in ontogeny significantly impact adult morphological evolution.

The evolution of metamorphic species may be constrained by different ecologies of the larval and adult stages. Here, Bardua et al. show that in frogs, adult ecology is more important than larval ecology for skull evolution, but species that don’t feed as tadpoles evolve faster than those that do.

ape 5.0: an environment for modern phylogenetics and evolutionary analyses in R

Emmanuel Paradis,  Klaus Schliep,  Russell Schwartz (2018)
After more than fifteen years of existence, the R package ape has continuously grown its contents, and has been used by a growing community of users. The release of version 5.0 has marked a leap towards a modern software for evolutionary analyses. Efforts have been put to improve efficiency, flexibility, support for 'big data' (R's long vectors), ease of use and quality check before a new release. These changes will hopefully make ape a useful software for the study of biodiversity and evolution in a context of increasing data quantity.

phytools: an R package for phylogenetic comparative biology (and other things)