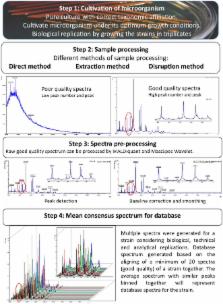 Matrix-assisted laser desorption/ionization time-of-flight mass-spectrometry (MALDI-TOF MS) based biotyping is an emerging technique for high-throughput and rapid microbial identification. Due to its relatively higher accuracy, comprehensive database of clinically important microorganisms and low-cost compared to other microbial identification methods, MALDI-TOF MS has started replacing existing practices prevalent in clinical diagnosis. However, applicability of MALDI-TOF MS in the area of microbial ecology research is still limited mainly due to the lack of data on non-clinical microorganisms. Intense research activities on cultivation of microbial diversity by conventional as well as by innovative and high-throughput methods has substantially increased the number of microbial species known today. This important area of research is in urgent need of rapid and reliable method(s) for characterization and de-replication of microorganisms from various ecosystems. MALDI-TOF MS based characterization, in our opinion, appears to be the most suitable technique for such studies. Reliability of MALDI-TOF MS based identification method depends mainly on accuracy and width of reference databases, which need continuous expansion and improvement. In this review, we propose a common strategy to generate MALDI-TOF MS spectral database and advocated its sharing, and also discuss the role of MALDI-TOF MS based high-throughput microbial identification in microbial ecology studies.

The rebirth of culture in microbiology through the example of culturomics to study human gut microbiota.

Jean-Christophe Lagier,  Perrine Hugon,  Saber Khelaifia … (2015)
Bacterial culture was the first method used to describe the human microbiota, but this method is considered outdated by many researchers. Metagenomics studies have since been applied to clinical microbiology; however, a "dark matter" of prokaryotes, which corresponds to a hole in our knowledge and includes minority bacterial populations, is not elucidated by these studies. By replicating the natural environment, environmental microbiologists were the first to reduce the "great plate count anomaly," which corresponds to the difference between microscopic and culture counts. The revolution in bacterial identification also allowed rapid progress. 16S rRNA bacterial identification allowed the accurate identification of new species. Mass spectrometry allowed the high-throughput identification of rare species and the detection of new species. By using these methods and by increasing the number of culture conditions, culturomics allowed the extension of the known human gut repertoire to levels equivalent to those of pyrosequencing. Finally, taxonogenomics strategies became an emerging method for describing new species, associating the genome sequence of the bacteria systematically. We provide a comprehensive review on these topics, demonstrating that both empirical and hypothesis-driven approaches will enable a rapid increase in the identification of the human prokaryote repertoire.