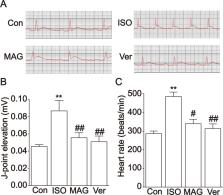 Monoammonium glycyrrhizinate (MAG) is an aglycone of glycyrrhizin that is found in licorice and is often used clinically as an injection to treat liver diseases. However, the effect of MAG injection on cardiac function and its possible cellular mechanisms remain unclear. We explored the protective effects of MAG against myocardial ischemic injury (MII) induced by isoproterenol (ISO), as well as the cellular mechanisms via molecular biology techniques and patch-clamp recording.

MAG reduced damage, improved cardiac morphology, inhibited oxidative stress, decreased the generation of reactive oxygen species, and decreased intracellular Ca 2+ concentration. Exposure of the rats’ ventricular myocytes to MAG resulted in a concentration-dependent reduction in L-type calcium currents (I Ca-L). MAG reduced I Ca-L in a consistent and time-dependent fashion with a semi-maximal prohibitive concentration of MAG of 14 μM. MAG also shifted the I-V curve of I Ca-L upwards and moved the activation and inactivation curves of I Ca-L to the left.

The findings indicate that MAG injection exerts a protective influence on ISO-induced MII by inhibiting oxidative stress and regulating Ca 2+ homeostasis by I Ca-L.

Ca2+- and mitochondrial-dependent cardiomyocyte necrosis as a primary mediator of heart failure.

Christopher P. Baines,  Steven R. Houser,  Nian-Zhang Zhang … (2007)
Loss of cardiac myocytes in heart failure is thought to occur largely through an apoptotic process. Here we show that heart failure can also be precipitated through myocyte necrosis associated with Ca2+ overload. Inducible transgenic mice with enhanced sarcolemmal L-type Ca2+ channel (LTCC) activity showed progressive myocyte necrosis that led to pump dysfunction and premature death, effects that were dramatically enhanced by acute stimulation of beta-adrenergic receptors. Enhanced Ca2+ influx-induced cellular necrosis and cardiomyopathy was prevented with either LTCC blockers or beta-adrenergic receptor antagonists, demonstrating a proximal relationship among beta-adrenergic receptor function, Ca2+ handling, and heart failure progression through necrotic cell loss. Mechanistically, loss of cyclophilin D, a regulator of the mitochondrial permeability transition pore that underpins necrosis, blocked Ca2+ influx-induced necrosis of myocytes, heart failure, and isoproterenol-induced premature death. In contrast, overexpression of the antiapoptotic factor Bcl-2 was ineffective in mitigating heart failure and death associated with excess Ca2+ influx and acute beta-adrenergic receptor stimulation. This paradigm of mitochondrial- and necrosis-dependent heart failure was also observed in other mouse models of disease, which supports the concept that heart failure is a pleiotropic disorder that involves not only apoptosis, but also necrotic loss of myocytes in association with dysregulated Ca2+ handling and beta-adrenergic receptor signaling.

A history of the therapeutic use of liquorice in Europe

Cristina Fiore,  Michael Eisenhut,  Eugenio Ragazzi … (2005)
Liquorice root has been used in Europe since prehistoric times, and is well documented in written form starting with the ancient Greeks. In this review we compare the independent development of medical uses of this botanical drug in several ancient cultures, attempting to show the rationality of specific indications across different ethnic groups with different cultural backgrounds. Identical specific indications in different cultures highlight universally reproducible therapeutic effects that are beyond those of a mere placebo. In the first part of the review, historical sources dealing with liquorice (Scythian, Greek, Roman, and from the Middle Ages in Germany, Italy, Spain, England) have been considered. In the second part, the historical records of diseases treated with liquorice have been presented. Finally, a comparison between traditional use in and outside Europe, with the most important recent scientific studies concerning its use, is presented.

Hua Li,  Yan-Hua Xie,  Qian Yang … (2012)
Background Traditional Chinese medicinal herbs Cortex Moutan and Radix Salviae Milthiorrhizaeare are prescribed together for their putative cardioprotective effects in clinical practice. However, the rationale of the combined use remains unclear. The present study was designed to investigate the cardioprotective effects of paeonol and danshensu (representative active ingredient of Cortex Moutan and Radix Salviae Milthiorrhizae, respectively) on isoproterenol-induced myocardial infarction in rats and its underlying mechanisms. Methodology Paeonol (80 mg kg−1) and danshensu (160 mg kg−1) were administered orally to Sprague Dawley rats in individual or in combination for 21 days. At the end of this period, rats were administered isoproterenol (85 mg kg−1) subcutaneously to induce myocardial injury. After induction, rats were anaesthetized with pentobarbital sodium (35 mg kg−1) to record electrocardiogram, then sacrificed and biochemical assays of the heart tissues were performed. Principal Findings Induction of rats with isoproterenol resulted in a marked (P<0.001) elevation in ST-segment, infarct size, level of serum marker enzymes (CK-MB, LDH, AST and ALT), cTnI, TBARS, protein expression of Bax and Caspase-3 and a significant decrease in the activities of endogenous antioxidants (SOD, CAT, GPx, GR, and GST) and protein expression of Bcl-2. Pretreatment with paeonol and danshensu combination showed a significant (P<0.001) decrease in ST-segment elevation, infarct size, cTnI, TBARS, protein expression of Bax and Caspase-3 and a significant increase in the activities of endogenous antioxidants and protein expression of Bcl-2 and Nrf2 when compared with individual treated groups. Conclusions/Significance This study demonstrates the cardioprotective effect of paeonol and danshensu combination on isoproterenol-induced myocardial infarction in rats. The mechanism might be associated with the enhancement of antioxidant defense system through activating of Nrf2 signaling and anti-apoptosis through regulating Bax, Bcl-2 and Caspase-3. It could provide experimental evidence to support the rationality of combinatorial use of traditional Chinese medicine in clinical practice.