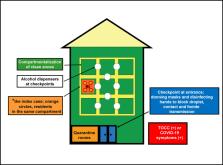 The COVID-19 outbreak has drawn heightened attention from public health scholars researching ways to limit its spread. Much of the research has been focused on minimizing transmission in hospitals and in the general community. However, a particularly vulnerable community that has received relatively little attention is elders residing in long-term care facilities (LTCFs). In this article we address this relative lack of attention, arguing that enhanced traffic control bundling (eTCB) can and should be adopted and implemented as a means of protecting LTCF residents and staff. Enhanced TCB has been widely applied in hospital settings and has proven effective at limiting droplet and fomite transmissions both within hospitals and between hospitals and the general community. By effectively adapting eTCB to LTCF conditions, particularly by incorporating compartmentalization within zones plus active surveillance, COVID-19 transmission into and throughout LTCFs can be minimized, thereby saving numerous lives among an especially vulnerable population.

Exhaled droplets due to talking and coughing.

Li Liu,  Yuguo Li,  X. C. Xie … (2009)
Respiratory infections can be spread via 'contact' with droplets from expiratory activities such as talking, coughing and sneezing, and also from aerosol-generating clinical procedures. Droplet sizes predominately determine the times they can remain airborne, the possibility of spread of infectious diseases and thus the strategies for controlling the infections. While significant inconsistencies exist between the existing measured data on respiratory droplets generated during expiratory activities, a food dye was used in the mouth during measurements of large droplets, which made the expiratory activities 'unnatural'. We carried out a series of experiments using glass slides and a microscope as well as an aerosol spectrometer to measure the number and size of respiratory droplets produced from the mouth of healthy individuals during talking and coughing with and without a food dye. The total mass of respiratory droplets was measured using a mask, plastic bag with tissue and an electronic balance with a high precision. Considerable subject variability was observed and the average size of droplets captured using glass slides and microscope was about 50-100 microm. Smaller droplets were also detected by the aerosol spectrometer. More droplets seemed to be generated when a food dye was used.

Tsung-Shu Wu,  Fuh-Yuan Frank Shih,  Muh-Yong Yen … (2008)
Background With international concern over emerging infectious diseases (EID) and bioterrorist attacks, public health is being required to have early outbreak detection systems. A disease surveillance team was organized to establish a hospital emergency department-based syndromic surveillance system (ED-SSS) capable of automatically transmitting patient data electronically from the hospitals responsible for emergency care throughout the country to the Centers for Disease Control in Taiwan (Taiwan-CDC) starting March, 2004. This report describes the challenges and steps involved in developing ED-SSS and the timely information it provides to improve in public health decision-making. Methods Between June 2003 and March 2004, after comparing various surveillance systems used around the world and consulting with ED physicians, pediatricians and internal medicine physicians involved in infectious disease control, the Syndromic Surveillance Research Team in Taiwan worked with the Real-time Outbreak and Disease Surveillance (RODS) Laboratory at the University of Pittsburgh to create Taiwan's ED-SSS. The system was evaluated by analyzing daily electronic ED data received in real-time from the 189 hospitals participating in this system between April 1, 2004 and March 31, 2005. Results Taiwan's ED-SSS identified winter and summer spikes in two syndrome groups: influenza-like illnesses and respiratory syndrome illnesses, while total numbers of ED visits were significantly higher on weekends, national holidays and the days of Chinese lunar new year than weekdays (p < 0.001). It also identified increases in the upper, lower, and total gastrointestinal (GI) syndrome groups starting in November 2004 and two clear spikes in enterovirus-like infections coinciding with the two school semesters. Using ED-SSS for surveillance of influenza-like illnesses and enteroviruses-related infections has improved Taiwan's pandemic flu preparedness and disease control capabilities. Conclusion Taiwan's ED-SSS represents the first nationwide real-time syndromic surveillance system ever established in Asia. The experiences reported herein can encourage other countries to develop their own surveillance systems. The system can be adapted to other cultural and language environments for better global surveillance of infectious diseases and international collaboration.