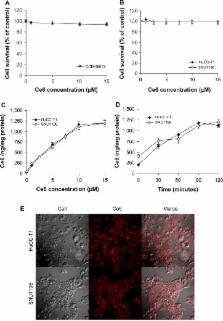 In this study, the effect of chlorin e6-based photodynamic therapy (Ce6-PDT) was investigated in human intrahepatic (HuCC-T1) and extrahepatic (SNU1196) cholangiocarcinoma (CCA) cells. The amount of intracellular Ce6 increased with increasing Ce6 concentration administered, or with incubation time, in both cell lines. The ability to take up Ce6 and generate reactive oxygen species after irradiation at 1.0 J/cm 2 did not significantly differ between the two CCA cell types. However, after irradiation, marked differences were observed for photodamage and apoptotic/necrotic signals. HuCC-T1 cells are more sensitive to Ce6-PDT than SNU1196 cells. Total glutathione (GSH) levels, glutathione peroxidase and glutathione reductase activities in SNU1196 cells were significantly higher than in HuCC-T1 cells. With inhibition of enzyme activity or addition of GSH, the phototoxic effect could be controlled in CCA cells. The intracellular level of GSH is the most important determining factor in the curative action of Ce6-PDT against tumor cells.

Increasing incidence and mortality of primary intrahepatic cholangiocarcinoma in the United States.

Trusha Patel (2001)
Clinical observations suggest a recent increase in intrahepatic biliary tract malignancies. Thus, our aim was to determine recent trends in the epidemiology of intrahepatic cholangiocarcinoma in the United States. Reported data from the Surveillance, Epidemiology, and End Results (SEER) program and the United States Vital Statistics databases were analyzed to determine the incidence, mortality, and survival rates of primary intrahepatic cholangiocarcinoma. Between 1973 and 1997, the incidence and mortality rates from intrahepatic cholangiocarcinoma markedly increased, with an estimated annual percent change (EAPC) of 9.11% (95% CI, 7.46 to 10.78) and 9.44% (95%, CI 8.46 to 10.41), respectively. The age-adjusted mortality rate per 100,000 persons for whites increased from 0.14 for the period 1975-1979 to 0.65 for the period 1993-1997, and that for blacks increased from 0.15 to 0.58 over the same period. The increase in mortality was similar across all age groups above age 45. The relative 1- and 2-year survival rates following diagnosis from 1989 to 1996 were 24.5% and 12.8%, respectively. In conclusion, there has been a marked increase in the incidence and mortality from intrahepatic cholangiocarcinoma in the United States in recent years. This tumor continues to be associated with a poor prognosis.

Mahin Maines (1988)
In biological systems oxidation of heme is carried out by two isozymes of the microsomal heme oxygenase, HO-1 and HO-2. HO-1 is the commonly known heme oxygenase, the activity of which can be induced by up to 100-fold in response to a wide variety of stimuli (metals, heme, hormones, etc.). HO-2 was only recently discovered, and the isozyme appears to be uninducible. The two forms are products of two different genes and differ in their tissue expression. The primary structure of HO-1 and an HO-2 fragment of 91 amino acid residues show only 58% homology, but share a region with 100% secondary structure homology. This region is believed to be the catalytic site. Most likely, HO-1 gene is regulated in the same manner as metallothione in the gene. HO-1 has a heat shock regulatory element, and possibly many promoter elements, which bind to respective inducers and cause transcription of the gene. In vivo induction of HO-1 activity in the liver is accompanied by decreases in the total P-450 levels and, in a reconstituted system, cytochrome P-450b heme can be quantitatively converted to biliverdin by HO-1 and HO-2. The enzyme activity is inhibited in vivo for extended periods subsequent to binding of Zn- and Sn- protoporphyrins. This property appears useful for the suppression of bilirubin production. The metalloporphyrins, however, are not innocuous and cause major disruptions in cellular metabolism. In this review recent findings on heme oxygenase are highlighted.

Glutathione and its role in cellular functions.

H Sies (1999)
Glutathione (GSH) is the major cellular thiol participating in cellular redox reactions and thioether formation. This article serves as introduction to the FRBM Forum on glutathione and emphasizes cellular functions: What is GSH? Where does it come from? Where does it go? What does it do? What is new and noteworthy? Research tools, historical remarks, and links to current trends.

*Both authors contributed equally to this work