Discovery of a new species of the Hypoxylon rubiginosum complex from Iran and antagonistic activities of Hypoxylon spp. against the Ash Dieback pathogen, Hymenoscyphus fraxineus , in dual culture 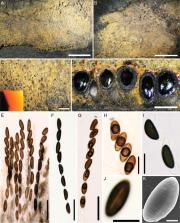 During a survey of xylarialean fungi in Northern Iran, several specimens that showed affinities to the Hypoxylon rubiginosum complex were collected and cultured. A comparison of their morphological characters, combined with a chemotaxonomic study based on high performance liquid chromatography, coupled with diode array detection and mass spectrometry (HPLC-DAD/MS) and a multi-locus phylogeny based on ITS, LSU, rbp2 and tub2 DNA sequences, revealed a new species here described as Hypoxylon guilanense . In addition, Hypoxylon rubiginosum sensu stricto was also encountered. Concurrently, an endophytic isolate of the latter species showed strong antagonistic activities against the Ash Dieback pathogen, Hymenoscyphus fraxineus , in a dual culture assay in our laboratory. Therefore, we decided to test the new Iranian fungi for antagonistic activities against the pathogen, along with several cultures of other Hypoxylon species that are related to H. rubiginosum . Our results suggest that the antagonistic effects of Hypoxylon spp. against Hym. fraxineus are widespread and that they are due to the production of antifungal phomopsidin derivatives in the presence of the pathogen.

Gerald F. Bills, Víctor González-Menendez, Jesús Martín … (2012)
Background Nodulisporic acids (NAs) are indole diterpene fungal metabolites exhibiting potent systemic efficacy against blood-feeding arthropods, e.g., bedbugs, fleas and ticks, via binding to arthropod specific glutamate-gated chloride channels. Intensive medicinal chemistry efforts employing a nodulisporic acid A template have led to the development of N-tert-butyl nodulisporamide as a product candidate for a once monthly treatment of fleas and ticks on companion animals. The source of the NAs is a monophyletic lineage of asexual endophytic fungal strains that is widely distributed in the tropics, tentatively identified as a Nodulisporium species and hypothesized to be the asexual state of a Hypoxylon species. Methods and Results Inferences from GenBank sequences indicated that multiple researchers have encountered similar Nodulisporium endophytes in tropical plants and in air samples. Ascomata-derived cultures from a wood-inhabiting fungus, from Martinique and closely resembling Hypoxylon investiens, belonged to the same monophyletic clade as the NAs-producing endophytes. The hypothesis that the Martinique Hypoxylon collections were the sexual state of the NAs-producing endophytes was tested by mass spectrometric analysis of NAs, multi-gene phylogenetic analysis, and phenotypic comparisons of the conidial states. We established that the Martinique Hypoxylon strains produced an ample spectrum of NAs and were conspecific with the pantropical Nodulisporium endophytes, yet were distinct from H. investiens. A new species, H. pulicicidum, is proposed to accommodate this widespread organism. Conclusions and Significance Knowledge of the life cycle of H. pulicicidum will facilitate an understanding of the role of insecticidal compounds produced by the fungus, the significance of its infections in living plants and how it colonizes dead wood. The case of H. pulicicidum exemplifies how life cycle studies can consolidate disparate observations of a fungal organism, whether from environmental sequences, vegetative mycelia or field specimens, resulting in holistic species concepts critical to the assessment of the dimensions of fungal diversity.

Affinities of Phylacia and the daldinoid Xylariaceae, inferred from chemotypes of cultures and ribosomal DNA sequences.