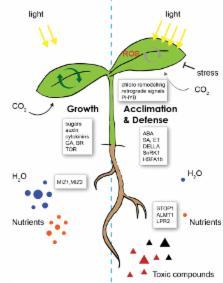 Vivek Verma, Pratibha Ravindran, Prakash Kumar (2016)
Background Being sessile organisms, plants are often exposed to a wide array of abiotic and biotic stresses. Abiotic stress conditions include drought, heat, cold and salinity, whereas biotic stress arises mainly from bacteria, fungi, viruses, nematodes and insects. To adapt to such adverse situations, plants have evolved well-developed mechanisms that help to perceive the stress signal and enable optimal growth response. Phytohormones play critical roles in helping the plants to adapt to adverse environmental conditions. The elaborate hormone signaling networks and their ability to crosstalk make them ideal candidates for mediating defense responses. Results Recent research findings have helped to clarify the elaborate signaling networks and the sophisticated crosstalk occurring among the different hormone signaling pathways. In this review, we summarize the roles of the major plant hormones in regulating abiotic and biotic stress responses with special focus on the significance of crosstalk between different hormones in generating a sophisticated and efficient stress response. We divided the discussion into the roles of ABA, salicylic acid, jasmonates and ethylene separately at the start of the review. Subsequently, we have discussed the crosstalk among them, followed by crosstalk with growth promoting hormones (gibberellins, auxins and cytokinins). These have been illustrated with examples drawn from selected abiotic and biotic stress responses. The discussion on seed dormancy and germination serves to illustrate the fine balance that can be enforced by the two key hormones ABA and GA in regulating plant responses to environmental signals. Conclusions The intricate web of crosstalk among the often redundant multitudes of signaling intermediates is just beginning to be understood. Future research employing genome-scale systems biology approaches to solve problems of such magnitude will undoubtedly lead to a better understanding of plant development. Therefore, discovering additional crosstalk mechanisms among various hormones in coordinating growth under stress will be an important theme in the field of abiotic stress research. Such efforts will help to reveal important points of genetic control that can be useful to engineer stress tolerant crops.

Effects of abiotic stress on plants: a systems biology perspective

Grant R Cramer, Kaoru Urano, Serge Delrot … (2011)
The natural environment for plants is composed of a complex set of abiotic stresses and biotic stresses. Plant responses to these stresses are equally complex. Systems biology approaches facilitate a multi-targeted approach by allowing one to identify regulatory hubs in complex networks. Systems biology takes the molecular parts (transcripts, proteins and metabolites) of an organism and attempts to fit them into functional networks or models designed to describe and predict the dynamic activities of that organism in different environments. In this review, research progress in plant responses to abiotic stresses is summarized from the physiological level to the molecular level. New insights obtained from the integration of omics datasets are highlighted. Gaps in our knowledge are identified, providing additional focus areas for crop improvement research in the future.

Phytochrome B integrates light and temperature signals in Arabidopsis

Martina Legris, Cornelia Klose, E. Burgie … (2016)
Ambient temperature regulates many aspects of plant growth and development, but its sensors are unknown. Here, we demonstrate that the phytochrome B (phyB) photoreceptor participates in temperature perception through its temperature-dependent reversion from the active Pfr state to the inactive Pr state. Increased rates of thermal reversion upon exposing Arabidopsis seedlings to warm environments reduce both the abundance of the biologically active Pfr-Pfr dimer pool of phyB and the size of the associated nuclear bodies, even in daylight. Mathematical analysis of stem growth for seedlings expressing wild-type phyB or thermally stable variants under various combinations of light and temperature revealed that phyB is physiologically responsive to both signals. We therefore propose that in addition to its photoreceptor functions, phyB is a temperature sensor in plants.