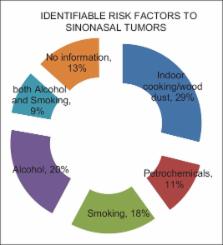 Sinonasal tumor is an uncommon tumor in Nigeria, but the burden of the disease in terms of morbidity and mortality is on the increase. The aim of this study is to evaluate the pattern of presentation and outcome of sinonasal tumor in our center.

This was a retrospective review of all the patients with sinonasal cancer seen in Ear, Nose, and Throat Department of the hospital between January 2008 and December 2013. The patients' biodata, clinical presentation, stage of the disease at presentation, identifiable risk factors, histopathological findings, and outcome were presented.

A total of 22 patients were diagnosed with sinonasal cancer out of 71 patients (31%) with head/neck cancers during the period of study. There were 12 males (54.5%) and 10 females (45.5%) with a mean age of 51 ± 2.1 years. Epistaxis, nasal blockage, and discharge were seen in all patients though 41% of patients presented first to the ophthalmologist due to proptosis. Identifiable risk factors were exposure to wood dust (29%) and petrochemical products in (11%). Most patients presented first at advanced stages of the disease (82%). Histologically, well-differentiated squamous cell carcinoma was the most common (54.6%) followed by nonintestinal well-differentiated adenocarcinoma in 18.2% and plasmacytoma (9.1%). Chemoradiation was the mainstay of management in (38%) though 13.6% had total maxillectomy with postsurgical chemoradiation and 50.4% defaulted due to cost of management.

Health education on early presentation and efforts at early detection of the disease are needed to achieve cure. Exposure to the identifiable risk factors should be reduced by protective measures. Easy access to radiotherapy at affordable price will surely improve the outcome of this disease.

A D Cheesman,  Sita Patel,  Matthias Kraus … (2005)
Malignant tumors of the superior sinonasal vault are rare, and, because of this and the varied histologic findings, most outcomes data reflect the experience of small patient cohorts. This International Collaborative study examines a large cohort of patients accumulated from multiple institutions experienced in craniofacial surgery, with the aim of reporting benchmark figures for outcomes and identifying patient-related and tumor-related predictors of prognosis after craniofacial resection (CFR). Three hundred thirty-four patients from 17 institutions were analyzed for outcome. Patients with esthesioneuroblastoma were excluded and are being reported separately. The median age was 57 years (range, 3-98 years). One hundred eighty-eight patients (56.3%) had had prior single-modality or combined treatment, which included surgery in 120 (36%), radiation in 79 (23.7%), and chemotherapy in 56 (16.8%). The most common histologic findings were adenocarcinoma in 107 (32%) and squamous cell carcinoma in 101 (30.2%). The margins of resection were close or microscopically positive in 95 (30%). Adjuvant radiotherapy was given in 161 (48.2%) and chemotherapy in 16 (4.8%). Statistical analyses for outcomes were performed in relation to patient characteristics, tumor characteristics, including histologic findings and extent of disease, surgical resection margins, prior radiation, and prior chemotherapy to determine predictive factors. Postoperative mortality occurred in 15 patients (4.5%). Postoperative complications occurred in 110 patients (32.9%). The 5-year overall, disease-specific, and recurrence-free survival rates were 48.3%, 53.3%, and 45.8%, respectively. The status of surgical margins, histologic findings of the primary tumor, and intracranial extent were independent predictors of overall, disease-specific, and recurrence-free survival on multivariate analysis. CFR for malignant paranasal sinus tumors is a safe surgical treatment with an overall mortality of 4.5% and complication rate of 33%. The status of surgical margins, histologic findings of the primary tumor, and intracranial extent are independent predictors of outcome.

Prognostic factors in sinonasal tumors involving the anterior skull base.

Aurora López-Maside,  E Maseda,  Carlos Suarez … (2004)
Anterior craniofacial resection is a standardized procedure for the treatment of ethmoid and frontal orbital tumors with intracranial invasion. A retrospective review of 100 patients with sinonasal tumors involving the anterior skull base who underwent combined craniofacial surgery at the Hospital Central de Asturias. The most frequent pathologic entity was adenocarcinoma (53 cases) and other epithelial tumors (29 cases). Five-year actuarial survival according to the Kaplan-Meier method was 40%. Factors such as involvement of surgical margins, orbital periosteum involvement, frontal sinus invasion, or spread into the dura had no significant effect on survival. Survival, however, was affected by the histologic findings of the tumor (p=.03), brain involvement (p=.04), deep soft tissue involvement of the orbit (p=.003), involvement of the sphenoid sinus (p=.001), previous treatment (p=.05), and postoperative recurrence (p=.0000). Neither the INT staging system nor the UICC system showed statistical prognostic significance. After multivariate analysis and Cox regression analysis, only recurrence after craniofacial resection, involvement of soft tissues of the orbit, and invasion of the sphenoid sinus significantly influenced survival. Standard staging systems did not show statistical prognostic significance. Only involvement of some critical areas was reliable as predictor of an unfavorable outcome. Copyright 2003 Wiley Periodicals, Inc. Head Neck 26: 136-144, 2004

Management of the orbit in malignant sinonasal tumors.

V Lund,  Massimo Politi,  José L Llorente … (2008)
Malignant ethmoid and maxillary sinus tumors frequently involve the orbit. Orbital involvement is an important prognostic predictor of recurrence-free, disease-specific, and overall survival. Most authors agree that orbital preservation as opposed to orbital exenteration or clearance does not result in significant differences in local recurrence or actuarial survival. The eye can be safely preserved in most patients with ethmoid or maxillary sinus cancer invading the orbital wall, including malignancies that invade the orbital soft tissues with penetration through the periorbita provided that they can be completely dissected away from the orbital fat. Malposition of the globe and nonfunctional eyes frequently result when patients have not had adequate rigid reconstruction of the orbital floor, particularly if they have received postoperative radiotherapy. This underscores the importance of such reconstruction. Isolated defects following orbital exenteration may be reconstructed with a temporalis muscle flap. Microvascular free-tissue transfer is the best option for repair of defects following orbital exenteration and total maxillectomy, although an obturator still has a role in selected patients.