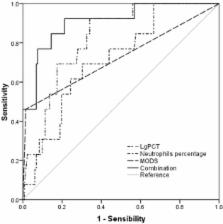 Objective: This study analyzed the significance of procalcitonin (PCT) in patients with hemorrhagic fever with renal syndrome (HFRS) caused by Hantaan virus.

Methods: The demographics and clinical and laboratory data including PCT at hospital admission in 146 adults with HFRS were retrospectively analyzed.

Conclusion: PCT concentrations at admission would be predictive of disease severity, secondary bacterial infection and mortality in patients with HFRS caused by Hantaan virus.

A global perspective on hantavirus ecology, epidemiology, and disease.

Colleen Jonsson,  Luiz Tadeu Moraes Figueiredo,  Olli Vapalahti (2010)
Hantaviruses are enzootic viruses that maintain persistent infections in their rodent hosts without apparent disease symptoms. The spillover of these viruses to humans can lead to one of two serious illnesses, hantavirus pulmonary syndrome and hemorrhagic fever with renal syndrome. In recent years, there has been an improved understanding of the epidemiology, pathogenesis, and natural history of these viruses following an increase in the number of outbreaks in the Americas. In this review, current concepts regarding the ecology of and disease associated with these serious human pathogens are presented. Priorities for future research suggest an integration of the ecology and evolution of these and other host-virus ecosystems through modeling and hypothesis-driven research with the risk of emergence, host switching/spillover, and disease transmission to humans.

Isolation of the etiologic agent of Korean Hemorrhagic fever.

Mark H. Johnson,  Gillian Lee,  S Lee (1978)
Lung tissues from 73 rodents (Apodemus agrarius coreae) gave specific immunofluorescent reactions when they reacted with sera from patients convalescing from Korean hemorrhagic fever. Similar staaining was observed in the lungs of A. agrarius inoculated with acute-phase sera obtained from two patients with this disease. The unidentified agent was successfully propagated in adult A. agrarius through eight passages representing a cumulative dilution of greater than 10(-17). Experimentally inoculated rodents developed specific fluorescent antigen in the lung, kidney, liver, parotid glands, and bladder. Organs, especially lungs, were positive beginning 10 days and continuing through 69 days after inoculation. The agent could not be cultivated in several types of cell cultures nor in laboratory animals. No fluorescence was observed when infected A. agrarius lung tissues were reacted with antisera to Marburg virus, Ebola virus, and serval arenaviruses. Diagnostic increases in immunofluorescent antibodies occurred in 113 of 116 severe and 11 of 34 milder cases of clinically suspected Korean hemorrhagic fever. Antibodies were present during the first week of symptoms, reached a peak at the end of the second week, and persisted for up to 14 years. Convalescent-phase sera from four persons suffering a similar disease in the Soviet Union were also positive for antibodies.