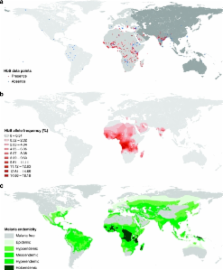 It has been 100 years since the first report of sickle haemoglobin (HbS). More than 50 years ago, it was suggested that the gene responsible for this disorder could reach high frequencies because of resistance conferred against malaria by the heterozygous carrier state. This traditional example of balancing selection is known as the 'malaria hypothesis'. However, the geographical relationship between the transmission intensity of malaria and associated HbS burden has never been formally investigated on a global scale. Here, we use a comprehensive data assembly of HbS allele frequencies to generate the first evidence-based map of the worldwide distribution of the gene in a Bayesian geostatistical framework. We compare this map with the pre-intervention distribution of malaria endemicity, using a novel geostatistical area-mean comparison. We find geographical support for the malaria hypothesis globally; the relationship is relatively strong in Africa but cannot be resolved in the Americas or in Asia. 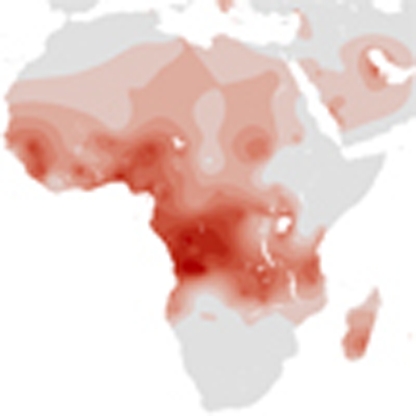 Sixty years ago it was suggested that the sickle cell disease mutation survives because the heterozygous genotype confers resistance to malaria, resulting in correlation of the two geographical distributions. The authors use a new global assembly of sickle allele frequencies to support this hypothesis at the global scale.

This work is licensed under a Creative Commons Attribution-NonCommercial-Share Alike 3.0 Unported License. To view a copy of this license, visit http://creativecommons.org/licenses/by-nc-sa/3.0/