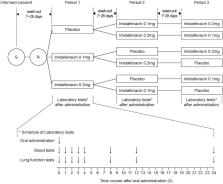 Although long-acting muscarinic receptor antagonists are central to the management of chronic obstructive pulmonary disease (COPD), inhaled medicines may have technical difficulty in some patients and adherence barriers.

A multicenter, randomized, double-blind, placebo-controlled 3×3 crossover Phase II trial was performed to evaluate the efficacy and safety of oral administration of the antimuscarinic agent imidafenacin in patients with COPD. Twenty-seven male COPD patients with % forced expiratory volume in 1 s (FEV 1) ≥30% and <80% predicted were randomized to single oral dose of imidafenacin 0.1 mg, imidafenacin 0.2 mg, or placebo.

Maximum change in FEV 1 with both doses of imidafenacin significantly improved from baseline to 24 hrs after administration when compared with a placebo. Area under the curve in FEV 1 during 24 hrs after administration with 0.2 mg, but not 0.1 mg dose, was significantly improved when compared with a placebo, and the improvement was significantly based on dose-dependent manners. Plasma imidafenacin level was positively correlated with change in FEV 1. All subjects with both doses of imidafenacin completed without moderate nor severe adverse events.

A single oral dose of imidafenacin 0.1 mg or imidafenacin 0.2 mg may contribute to the improvement of pulmonary function with excellent safety and tolerability in patients with COPD.

Peter Barnes (2013)
Chronic obstructive pulmonary disease (COPD) is associated with chronic inflammation of the peripheral airways and lung parenchyma, which leads to progressive obstruction of the airways. Current management with long-acting bronchodilators does not reduce disease progression, and there are no treatments that effectively suppress chronic inflammation in COPD. An increased understanding of the inflammatory processes that are involved in the pathophysiology of COPD has identified several new therapeutic targets. This Review discusses some of the most promising of these targets, including new antioxidants, kinase inhibitors and drugs that target cellular senescence, microbial colonization, epigenetic regulation of inflammatory gene expression and corticosteroid resistance.

B Disse,  T J Witek,  Peter G. Speck … (1998)
Inhaled antimuscarinics, often called anticholinergics in clinical medicine, are established as first line bronchodilators in COPD. Tiotropium has been developed as a new generation antimuscarinic following ipratropium. Tiotropium is a specific, highly potent antimuscarinic, demonstrating very slow dissociation from muscarinic receptors. Dissociation from M2-receptors is faster than from M3 or M1, which in functional in vitro studies, appeared as kinetic receptor subtype selectivity of M3 and M1 over M2. The high potency and slow receptor dissociation found its clinical correlate in significant and long lasting bronchodilatation and bronchoprotection in patients with COPD and asthma. In asthma, protection against methacholine challenge exceeded the study period of 48 hours. In COPD, bronchodilatation of about 80% of the plateau was demonstrated after the first dose. Following chronic once daily inhalation for 28 days, the improvement in pulmonary function was sustained and there was a further increase in peak effects, but more importantly a rising baseline, achieving steady state within 2 weeks. Tiotropium achieves very stable long lasting effects with comparatively low variation of bronchodilatation between peak and trough (the level before the next administration). Stable 24 hour effectiveness profiles the compound as the first once daily bronchodilator. Clinical correlates of kinetic receptor subtype selective blockade remain to be shown. Plasma levels of tiotropium at trough are in the low pg/ml range and are unlikely to explain the sustained effectiveness in the airways. Slow dissociation from muscarinic receptors is likely to be responsible for the long duration of action.