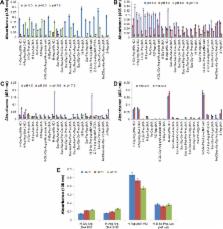 The aim of this study was to investigate the bacteriostatic and bactericidal effects of diminazene aceturate (DA) against five strains of pathogenic bacteria and two strains of nonpathogenic bacteria. The results showed that 5 μg/mL of DA suppressed the growth of pathogenic Escherichia coli by as much as 77% compared with the controls. Enterohemorrhagic E. coli EDL933 (an E. coli O157:H7 strain) was the most sensitive to DA with a minimum inhibitory concentration of 20 μg/mL. Additional investigations showed that DA induced the highest level of intracellular reactive oxygen species in EDL933. A positive correlation between the reactive oxygen species levels and DA concentration was demonstrated. DA (5 μg/mL) was also a potent uncoupler, inducing a stationary phase collapse (70%–75%) in both strains of E. coli O157:H7. Further investigation showed that the collapse was due to the NaCl:DA ratio in the broth and was potassium ion dependent. A protease screening assay was conducted to elucidate the underlying mechanism. It was found that at neutral pH, the hydrolysis of H-Asp-pNA increased by a factor of 2–3 in the presence of DA, implying that DA causes dysregulation of the proton motive force and a decrease in cellular pH. Finally, a commercial verotoxin test showed that DA did not significantly increase toxin production in EDL933 and was a suitable antibacterial agent for Shiga-toxin-producing E. coli.

Phillip Tarr,  Carrie A Gordon,  Wayne Chandler (2005)
Most cases of diarrhoea-associated haemolytic uraemic syndrome (HUS) are caused by Shiga-toxin-producing bacteria; the pathophysiology differs from that of thrombotic thrombocytopenic purpura. Among Shiga-toxin-producing Escherichia coli (STEC), O157:H7 has the strongest association worldwide with HUS. Many different vehicles, in addition to the commonly suspected ground (minced) beef, can transmit this pathogen to people. Antibiotics, antimotility agents, narcotics, and non-steroidal anti-inflammatory drugs should not be given to acutely infected patients, and we advise hospital admission and administration of intravenous fluids. Management of HUS remains supportive; there are no specific therapies to ameliorate the course. The vascular injury leading to HUS is likely to be well under way by the time infected patients seek medical attention for diarrhoea. The best way to prevent HUS is to prevent primary infection with Shiga-toxin-producing bacteria.

Joshua Friedman,  David Friedman,  Matthew Waldor (2005)
In many pathogenic bacteria, genes that encode virulence factors are located in the genomes of prophages. Clearly bacteriophages are important vectors for disseminating virulence genes, but, in addition, do phage regulatory circuits contribute to expression of these genes? Phages of the lambda family that have genes encoding Shiga toxin are found in certain pathogenic Escherichia coli (known as Shiga toxin producing E. coli) and the filamentous phage CTXphi, that carries genes encoding cholera toxin (CTX), is found in Vibrio cholerae. Both the lambda and CTXphi phages have repressor systems that maintain their respective prophages in a quiescent state, and in both types of prophages this repressed state is abolished when the host cell SOS response is activated. In the lambda type of prophages, only binding of the phage-encoded repressor is involved in repression and this repressor ultimately controls Shiga toxin production and/or release. In the CTXphi prophage, binding of LexA, the bacterial regulator of SOS, in addition to binding of the repressor is involved in repression; the repressor has only limited control over CTX production and has no influence on its release.

C Fuller,  William Weiss,  Colleen McGannon (2010)
Shiga toxin (Stx) in Escherichia coli O157:H7 is encoded as a late gene product by temperate bacteriophage integrated into the chromosome. Phage late genes, including stx, are silent in the lysogenic state. However, stress signals, including some induced by antibiotics, trigger the phage to enter the lytic cycle, and phage replication and Stx production occur concurrently. In addition to the Stx produced by O157:H7, phage produced by O157:H7 can infect harmless intestinal E. coli and recruit them to produce Shiga toxin. To understand how antibiotics influence Stx production, Stx lysogens were treated with different classes of antibiotics in the presence or absence of phage-sensitive E. coli, and Stx-mediated inhibition of protein synthesis was monitored using luciferase-expressing Vero cells. Growth-inhibitory levels of antibiotics suppressed Stx production. Subinhibitory levels of antibiotics that target DNA synthesis, including ciprofloxacin (CIP) and trimethoprim-sulfamethoxazole, increased Stx production, while antibiotics that target the cell wall, transcription, or translation did not. More Stx was produced when E. coli O157:H7 was incubated in the presence of phage-sensitive E. coli than when grown as a pure culture. Remarkably, very high levels of Stx were detected even when growth of O157:H7 was completely suppressed by CIP. In contrast, azithromycin significantly reduced Stx levels even when O157:H7 viability remained high.