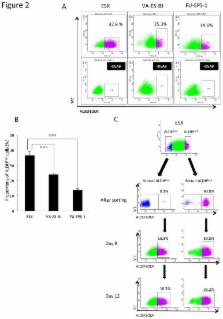 Epithelioid sarcoma (ES) is a relatively rare, highly malignant soft tissue sarcoma. The mainstay of treatment is resection or amputation. Currently other therapeutic options available for this disease are limited. Therefore, a novel therapeutic option needs to be developed. In the present study, we established a new human ES cell line (ESX) and analyzed the characteristics of its cancer stem-like cells/cancer-initiating cells (CSCs/CICs) based on ALDH1 activity. We demonstrated that a subpopulation of ESX cells with high ALDH1 activity (ALDH high cells) correlated with enhanced clonogenic ability, sphere-formation ability, and invasiveness in vitro and showed higher tumorigenicity in vivo. Next, using gene expression profiling, we identified CD109, a GPI-anchored protein upregulated in the ALDH high cells. CD109 mRNA was highly expressed in various sarcoma cell lines, but weakly expressed in normal adult tissues. CD109-positive cells in ESX predominantly formed spheres in culture, whereas siCD109 reduced ALDH1 expression and inhibited the cell proliferation in vitro. Subsequently, we evaluated the expression of CD109 protein in 80 clinical specimens of soft tissue sarcoma. We found a strong correlation between CD109 protein expression and the prognosis ( P = 0.009). In conclusion, CD109 might be a CSC/CIC marker in epithelioid sarcoma. Moreover, CD109 is a promising prognostic biomarker and a molecular target of cancer therapy for sarcomas including ES.

Formation of pluripotent stem cells in the mammalian embryo depends on the POU transcription factor Oct4.

Benjamin J. Nichols,  I Chambers,  Hitoshi Niwa … (1998)
Oct4 is a mammalian POU transcription factor expressed by early embryo cells and germ cells. We report that the activity of Oct4 is essential for the identity of the pluripotential founder cell population in the mammalian embryo. Oct4-deficient embryos develop to the blastocyst stage, but the inner cell mass cells are not pluripotent. Instead, they are restricted to differentiation along the extraembryonic trophoblast lineage. Furthermore, in the absence of a true inner cell mass, trophoblast proliferation is not maintained in Oct4-/- embryos. Expansion of trophoblast precursors is restored, however, by an Oct4 target gene product, fibroblast growth factor-4. Therefore, Oct4 also determines paracrine growth factor signaling from stem cells to the trophectoderm.

Stem cells, the molecular circuitry of pluripotency and nuclear reprogramming.

Rudolf Jaenisch,  Richard Young (2008)
Reprogramming of somatic cells to a pluripotent embryonic stem cell-like state has been achieved by nuclear transplantation of a somatic nucleus into an enucleated egg and most recently by introducing defined transcription factors into somatic cells. Nuclear reprogramming is of great medical interest, as it has the potential to generate a source of patient-specific cells. Here, we review strategies to reprogram somatic cells to a pluripotent embryonic state and discuss our understanding of the molecular mechanisms of reprogramming based on recent insights into the regulatory circuitry of the pluripotent state.